Conflict in the Caucasus: Restoring Peace and Principle in that Region and the World

Watching for signs of war with Iran, many of us probably took our eyes off other hot spots where President George W. Bush’s imminent departure is a strategic consideration. In this guest post I turn attention to one such hot spot, the Caucasus.
Georgia’s Mikheil Saakashvili (left) launched his military action to regain control of South Ossetia, no doubt with the departure in mind and probably thinking America’s pro-war administration would back him — that President Bush would tamp down any Russian response while watching the Olympics together with Prime Minister Vladimir Putin (above right).
But Saakashvili’s action was unlawful and foolhardy. The world is rightly condemning the disproportionate Russian response. President Bush and both presidential candidates have done so. The McCain and Obama camps have both cited violations of international law — it must, however, be emphasized that among those violations is the Georgian raid.
Georgia’s claim to title of both South Ossetia and Abkhazia is good. Groups in both regions want independence from Georgia on the basis of human rights violations and historic grievances. Violence has erupted among ethnic groups in both places. In the early 1990s, Georgia agreed to the presence of “peacekeeping” troops to keep order. These have mostly been Russian soldiers supporting those who want independence. The agreements clearly do not strip Georgia of title. But they do mean that until they are terminated and foreign troops are given a chance to exit, Georgia has no right to use military force to expel them. These principles were restated most recently in Armed Activities on the Territory of Congo, a 2005 International Court of Justice judgment.
Given its right to be in South Ossetia, Russia also had the right to take defensive action against Georgia. That means, however, only action necessary and proportional to accomplish the purpose of defense (as 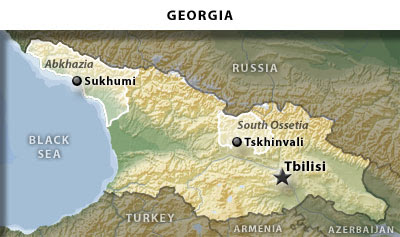 I detailed here in 2002). Russian bombing beyond South Ossetia, striking civilians — even inadvertently — cannot be justified. (map credit) Israel was heavily criticized in 2006 in its war with Hezbollah in Lebanon for disproportionate force. Israel also had the right to take defensive action against Hezbollah rockets, but bombing far beyond the rocket positions in heavily populated civilian areas was condemned. Surely Russia joined in that condemnation?
Russia’s purpose in its excessive use of force may well be to create a situation where it can make excessive demands in peace negotiations. It may demand independence for Abkhazia and South Ossetia and that Saakashvili step down.
The right response to the Russians is to repeat back the arguments they have been making for years with respect to Kosovo — that territory does not change hands because of human rights violations against inhabitants. (IntLawGrrl Elena Baylis posted concerns here when Kosovo declared independence.) Territory should never change hands because of the unlawful use of force. International law mandates other means and mechanisms of protecting human rights. Indeed, the Russian use of such arguments now — so close to the European and American arguments for Kosovo — must be intentional. Europe and America are hardly in a position to renounce them now when it comes to Georgia.
But China can. It joined Russia in arguing that Kosovo’s independence violates international law. China should be encouraged to join the mediation of this conflict — thus supporting the international rule of law. It will be so much easier then for the next U.S. president to remind China of the international law with respect to human rights, the environment, trade, and peace. Much easier than it has been for President Bush.
Indeed, the time is right for a general renewal of commitment to peace and the international law that supports it in the face of yet another unlawful, foolhardy, and tragic conflict.
by Mary Ellen O'Connell at 12:02 AM

Thank you Mary Ellen and welcome!