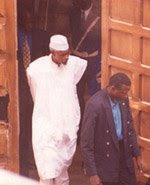 Le Monde reports that former Chadian President Hissène Habré (dressed in white in the photo at left) was convicted of crimes against humanity and yesterday sentenced to death by a criminal court in N'Djamena, Chad's capital city. But the defendant was not present: he's been in exile in Senegal since 1991.
"Africa's Pinochet" is the nickname that Human Rights Watch gave Habré, whose government is said to have "carried out some 40,000 politically motivated murders and 200,000 cases of torture" from when he seized power in 1982 and when he was deposed in 1990. That NGO maintains a Case against Habré webpage replete with documents and other links.
The premier situs for that case has not been Chad, however. Senegal indicted him, but its courts initially rebuffed the prosecution. Then Belgium issued an international arrest warrant. Senegal thus sought to extradite Habré, but its courts against rebuffed the effort. Then, in 2006, the African Union "[m]andate[d] the Republic of Senegal to prosecute and ensure that Hissène Habré is tried, on behalf of Africa, by a competent Senegalese court with guarantees for fair trial." And now? According to Le Monde,

Senegal's Minister of Justice, Madické Niang, indicated in July, after the country's legislature modified its Constitution to permit such a proceeding, that Dakar was 'ready' for the trial of Habré.