It's official, Pervez Musharraf has resigned. As the IHT reports: 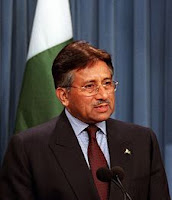 Facing imminent impeachment charges, Musharraf announced his resignation on Monday, after months of belated recognition by American officials that he had become a waning asset in the campaign against terrorism.
The decision removes from Pakistan's political stage the leader who for nearly nine years served as one of the United States' most important — and ultimately unreliable — allies. And it now leaves American officials to deal with a new, elected coalition that has so far proved itself to be unwilling or unable to confront an expanding Taliban insurgency determined to topple the government.

A top item on the agenda, along with choosing a new president within 30 days, is reinstating the 60 judges Musharraf fired. (See below for more on what may be next.)
by Naomi Norberg at 7:00 AM