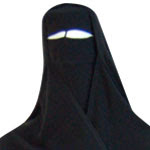 The French Declaration of the Rights of Man and of the Citizen of 1789 proclaims that "No one may be disturbed on account of his opinions, even religious ones, as long as the manifestation of such opinions does not interfere with the established Law and Order." In late June, the Conseil d'Etat, France's highest administrative court, essentially decided that wearing a niqab (image credit) and "lead[ing] a life almost of a recluse, cut off from French society, leaving the house only to walk with her children or visit relatives" meant that Faiza X's "radical practice" of her religion somehow interferes with the established Law and Order. The Conseil wrote, in fact, that it is "incompatible with the essential values of the French community, notably with the principle of equality of the sexes." Since the Civil Code requirements for gaining French citizenship have been revised over the last 15 years to require more and more complete assimilation, the Conseil felt justified in denying Ms. X citizenship. But I wonder...I was not asked in my interview, as Ms. X apparently was, whether I knew anything about secularism or my right to vote, only whether I could speak French (now a requirement for those wanting to enter France on family grouping grounds) and undertake administrative proceedings myself (which made my husband and I laugh because he, a French native, is much harder put to do so than I am). Secretary of state for urban affairs Fadela Amara considers the veil "a prison, a straitjacket." Indeed, to her, the niqab is "not a religious sign but the visible sign of a totalitarian political project preaching inequality between the sexes...which carries within it the total absence of democracy." Even if true, does that mean that wearing one interferes with established law and order? If women like me are not asked any questions whatsoever regarding the essential values of the French community, the focus of the interview being more on whether or not my marriage is a sham to gain citizenship, does it not interfere with essential values and established law, i.e., against discrimination, to ask such questions of a veiled woman? Discussions of the case have focused on the fact that Faiza X did not wear the niqab in her native Morocco, but became radicalized in France. I've read that change can make people religious because we lose our bearings. The greatest period of church building in the US was apparently in the 1950s, when folks moved from the cities to the suburbs and needed to create "community" somewhere in those vast expanses that resembled nothing except each other. The rise of religiosity since the 1980s can be linked to the fact that Americans move 10-12 times in their adult lives and change jobs about the same number of times, and émigrés everywhere tend to be more religious than they were at home. Were Faiza X seeking asylum in France after being persecuted in Morocco for refusing to wear the veil, I would gladly quote Fadela Amara and insist that Ms. X is being persecuted for political reasons and should be granted refugee status on those grounds (under such circumstances, she would be granted that status on religious grounds in France). But in this instance, I'm more tempted to say that in its desire to rid France of radical Islam, the Conseil d'Etat has confused, rather than separated, church and state and neglected the essential value of equality. In doing so, they are more likely to contribute to radicalizing Ms. X's children than had they granted her citizenship.
by Naomi Norberg at 6:02 AM