It's IntLawGrrls' great pleasure to feature a guest post today from our colleague Mary Ellen O'Connell (right).
The Robert and Marion Short Professor of Law at Notre Dame University, South Bend, Indiana, Mary Ellen's a noted expert on the use of force, armed conflict, and international law, issues on which her scholarship concentrates. Her most recent book is The Power and Purpose of International Law (Oxford University Press, 2008), which she describes as "a renewed and updated theory of international law for the post-torture era" that responds to Jack L. Goldsmith and Eric A. Posner, The Limits of International Law (2005).
Mary Ellen's guest post below begins by observing that the world's collective attention may have been too closely trained on saber-rattling in Iran (on which she'd written earlier, as IntLawGrrls noted here and here) and, this week, on the Beijing Olympic Games (prior IntLawGrrls posts here). She then redirects attention, to 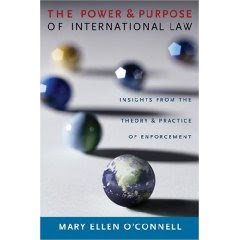 international law issues underlying the struggle between Russia and Georgia for control of the troubled regions of Abkhazia and South Ossetia.
Mary Ellen earned a bachelor's degree from Northwestern University, then studied as a Marshall Scholar, earning her master's degree in international relations from the London School of Economics and an LL.B. from Cambridge. Thereafter she earned a J.D. from Columbia University, where she was a Stone Scholar and book review editor for the Columbia Journal of Transnational Law; she practiced at Covington & Burling. Since entering academia, Mary Ellen has taught law at institutions in the United States, Italy, and Germany.
Mary Ellen dedicates her post to Jane Addams (below) whom she describes as a "peace 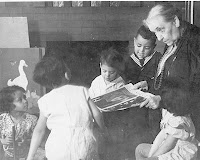 campaigner extraordinaire." Indeed: as IntLawGrrls detailed here, Addams (1860-1935) was renowned as a pacifist, feminist, suffragist, settlement-house founder, and social worker; she was awarded the Nobel Peace Prize in 1931. Today Addams joins IntLawGrrls' other foremothers in the honor list just below the "visiting from ..." map at right. (photo credit)
Heartfelt welcome!
by Diane Marie Amann at 12:03 AM