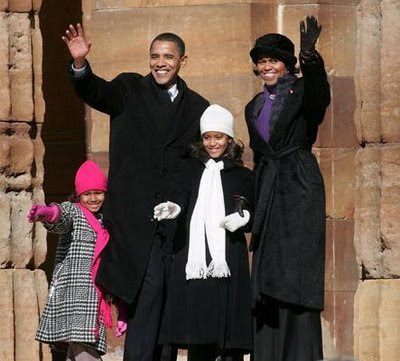 (Warning: This post has very little to do with international law. Instead, it’s about all those people with tears in their eyes in living rooms, bars, classrooms, conference centers, and a big sports arena in Denver, Colorado, on Thursday night. It’s about the smile on my mom’s face (she doesn’t get to smile often enough) when she got a glimpse of Senator Barack Obama at a campaign event last winter... Or maybe it is about human rights after all.)

Then and Now
As a child of the 60s and 70s, I was constantly instilled with the belief that individuals or groups could change the world. The problems of the day were clear even to children — war, racism and apartheid, sexism, violence in streets and homes, political corruption, abuses against immigrants, and grinding poverty in urban centers and rural valleys.
But the sense that we could participate in broad social movements and thereby could DO something about these things was palpable. We had the optimistic expectation that grassroots action and organized political pressure on governments could result in real change.
This sense of commitment to social justice was both substantive and enmeshed in popular culture. People flashed peace signs and Black power salutes to strangers on the street. We called each other “sister” or “brother.”
Women marched for “liberation” and passage of the Equal Rights Amendment. Music and art called for cross-cultural and cross-gender respect and dialogue.
Young people joined the Peace Corps. 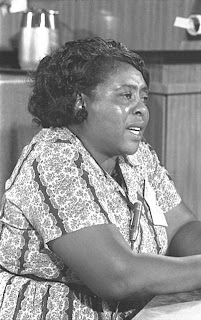 Civil rights laws were passed, a massive anti-war movement took place, and anti-poverty, early childhood education, and healthcare programs were organized. Mrs. Fannie Lou Hamer, Vice-Chair of the Mississippi Freedom Democratic Party (see photo left: courtesy of UBM.com), testified about state-sanctioned racism and violence at the Credentials Committee before the 1964 Democratic National Convention in Atlantic City, New Jersey. (Prior IntLawGrrls post here; click here for audio and text of speech). Congresswoman Shirley Chisholm spoke out in favor of the Equal Rights Amendment and ran for President (lower right). (Prior IntLawGrrls post here.)
Such efforts had their successes and failures, as have the movements that came before them. Since then, however, we’ve seen the Gulf War, the September 11 crimes against humanity, the Iraq War, the Rwanda genocide, “ethnic cleansing” in the violent disintegration of the former Yugoslavia, systematic rape and sexual violence in the Democratic Republic of Congo, the Darfur genocide, and other violent conflicts throughout the world.
We’ve seen governments fail to protect the economic and social rights of the poor, persons with disabilities, the elderly, and other marginalized groups among us on a daily basis, as well as during massive crises such as Hurricane Katrina and Cyclone Nargis in Burma. We’ve seen too many young men in prisons or hospital emergency rooms who should have been in high school classrooms.
Fundamental human rights are under attack. Over the last 8 years, the absolute legal prohibition on torture under international law and the international and domestic laws protecting privacy and due process have been put up for grabs.
So, instead of the urge toward social change, a sense of cynicism, helplessness, and despair began to pervade the atmosphere and our popular culture. That included those of us in the academy.
“Rock Star” or Leadership?
What many pundits missed from the beginning about Senator Barack Obama’s presidential campaign is that Americans need to believe that THEY can do something that matters again. All the remarks about “rock star” status and “Obamania” aside, it is that desire that primarily motivates the crowds to show up in Iowa and New York, Wisconsin, and Illinois, South Carolina, Oregon, and now, Colorado.
Charges of “elitism” ring hollow. If anything, Obama’s life story fits the classic American Dream narrative instead. African-American son of a white working-class single-mother and a Kenyan immigrant rises to attend Ivy League schools on scholarship and loans. He ends up vying for the presidency of the United States. Elitism involves looking down on, or mistreating, others because of class bias, not whether one did well at a high-profile university.
Of course, many are engaged by the senator’s individual charisma, intelligence, oratory, and political savvy. We tend to be an image-driven society after all.
But when I talk with young and older people who are committed to the campaign, it is apparent that they have a sense of relief and renewed energy. Even the young felt beaten down and silenced by immoral and illegal official policies, unreliable or superficial news coverage, fears about relatives and friends sent off for third deployments in an ill-conceived war, anger that Americans had become hated targets for some, and frustration that the promises of the American Dream are still largely unattainable for most poor, working-class people, and people of color.

“Yes We Can”
That is why, like some other crusty skeptics of my generation, I found myself in tears in front of my computer when I first saw the “Yes We Can” music video making the rounds on the internet (and about which IntLawGrrls posted here). Nice song, yes. Stylish images, yes. Famous young entertainers, yes (although I was sufficiently out of touch not to know who most of them are). And evocative of Martin Luther King Jr.’s great oratory. (IntLawGrrls posted video examples of Dr. King's speeches here and here.)
What was most moving, however, was the evidence that young people had been inspired to believe that THEY, in diverse coalitions, could help create social change. Everything was possible.

The End of Racism? Or A Step in the Right Direction?
The Iowa primary was another such moment. No matter what followed, the buzz on the phonelines and e-mails was that change is possible. Possible, despite pundits that said racism would always prevail in presidential elections. Possible, despite the ingrained belief that voters would never think outside traditional race, class, and gender demographic expectations.
Yet, neither Obama himself, nor the rest of us can believe that a single primary,

nomination, or election victory signals the end of racism in the United States. There are some who prefer to believe this, I know. But every long-time activist is aware that the ascendancy of “firsts” are an important beginning, not the end. Real change is broad, deep, and complex.

History
Still, it is those historic and symbolic moments—Rev. Dr. King proclaiming his dream for America in Washington, DC, and his vision for an end to the war in Vietnam and an end to poverty at home (click here for audio of his “Beyond Vietnam — A Time to Break Silence” speech) and the Obamas’ potential to be the First Family of the United States — that inspire us all to keep working for change.

Hope,
Thank you so much for this post. Also a child of the 60s-70s, I dedicate a chapter of my dissertation to citizen involvement in evolving the law and it's a chapter I want to incorporate into my teaching, be it over here or over there (though preferably over there). As an expat without TV who doesn't bother to watch YouTube I've not been even a virtual witness to Obama's alleged charisma, but it is the renewed fervor and sense that yes, we can, indeed we must get involved and make the change we want that has convinced me that it's time for this Grrl to come home!

Read this for your daughters!

Senator Clinton and Governor Palin are proof that women can and do diverge on important issues.

Suffragettes were opposed by many women who were what was known as 'anti.'

They believed women were incapable of selecting or becoming political leaders, even as they themselves took leadership roles against votes for women!

The most influential 'anti' lived in the White House. First Lady Edith Wilson was a wealthy Washington widow who married President Wilson in 1915, six months after the death of his pro-suffrage wife Ellen.

She endeared herself to her future husband when she declared at their first meeeting that she didn't even know who the candidates were in the 1912 election, and felt that women had no business whatsoever in politics.

Her precise role in the jailing and torture of Alice Paul and hundreds of suffragettes will never be known, but she was outraged that they picketed her husband's White House.

Most people are totally in the dark about HOW the suffragettes won, and what life was REALLY like before they did.

"The Privilege of Voting" is a new FREE e-mail series that follows eight great women from 1912 - 1920 to reveal ALL that happened to set the stage for women to finally win the vote.

It's a real-life soap opera!

There are tons of heartache on the rocky road to the ballot box, but in the end, women WIN!

Now we can support the candidates we choose - right, left or in-between!

Exciting, sequential e-mail episodes are perfect to read during coffeebreaks!

Naomi and Viginia,
Thanks for your comments! The following is an abbreviated response, since the earlier version timed out...oh well.
Naomi,
I look forward to reading your dissertation in print. I also appreciate your many IntLawGrrl posts. I hope that you will return "home" to enrich the international legal environment in the U.S. as you have in Europe and in cyberspace. I hope that you will be able to avoid the vast wasteland of television however (some of us remain hooked)!
Virginia,
I agree that the category of "women" hides a multitude of particularities (race/ethnicity, culture, religion, political bent, economic and social class, language, orientation, disability status among them). This is true also of categories like "people of color."
It is also one reason why I think it is so important to protect human rights. In such an environment, individuals or groups can speak, argue, dissent, vote, farm, run businesses, raise families, organize, manage hospitals, nurse, or teach internationl law as they choose and are able.
Interesting to hear more about the "anti's". I suspect they were either trying to protect perceived class privilege or feared the undermining of a false sense of security once a world of possibilities were opened for women.
As a film buff, I wonder what you and other readers thought of the feature film about Alice Paul, "Iron-Jawed Angels"?
(Linked here http://www.hbo.com/films/ironjawedangels/)
It seemed to do a credible job of portraying the personal dramas, political strategy, internal divisions, and coalition-building involved. It also showed the state-sponsored and private violence unleashed against the women's movement. I do wish it had given more time to the roles played by African-American women's suffrage and anti-lynghing activists like Ida B. Wells-Barnett
http://www.library.csi.cuny.edu/dept/history/lavender/wells.html

In any case, the struggle continues. Let's hope the next generation won't have to work as hard to ensure social justice for all women.
Peace,
Hope