The Olympics are here, and despite serious concerns about the human rights record of their host, China (see post), they are, as ever, a source of inspirational stories. Three stories of courage particularly caught my attention, stories of sisters, mothers, and grandmothers whose bravery merits at least a gold medal:
The first, Robina Muqimyar (pictured right; photo credit), is the only w 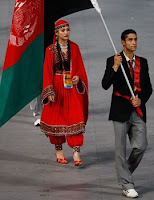 oman competing for Afghanistan in this year's Olympics. In an interview with the BBC, she talks about the serious obstacles she faced in training for the games and why she competes in hijab. Provided with only two weeks of training in the stadium in Kabul used by the Taliban to execute dissidents, Muqimyar sees herself as a role model for other Afghan women. In her words, her participation in the games sends "a message to encourage them[;] some day they want to be like me, and I will support and help them." On her decision to wear the scarf while running:

I am a representative of an Islamic country and I am a Muslim; I wear the scarf, I like it and I am honored to wear it. It's also a chance to be different from other athletes. I'm sure my people support me.

The second, Nelly Rico, is the mother of gold medalist Henry Cejudo. For those who missed the write-up in the NY Times, Rico "came to the United States from Mexico as an illegal immigrant, raised seven children by herself and left Los Angeles with them in the middle of the night to escape the career criminal who was the father Cejudo never really knew. . . Cejudo talked of all the hours his mother had worked over the years, as a janitor and a construction worker, anything to put food on the table or to heat the house. He talked about all the times they moved, from Los Angeles to New Mexico to Phoenix to Colorado Springs, each time in search of a better life. 'I wish I could just give her the medal right now,' Cejudo said."

The third story is that of Wu Dianyuan and Wang Xiuying (pictured left; photo credit), two Chinese women in their late 70s. Frustrated with the insufficient compensation provided after their homes were seized for redevelopment six years ago, the women applied "to hold a legal protest in a designated area in Beijing, where officials promised that Chinese could hold demonstrations during the Olympic Games." The result? Beijing police sentenced Ms. Wu and Ms. Wang to an extrajudicial term of “re-education through labor.”
In the face of laws and policies that violated rather than protected their rights, each of these women chose to stand up and fight, and in doing so, became models of courage for all of us. Brava!
by Jaya Ramji-Nogales at 7:00 AM