On this day in ...
... 2003 (5 years ago today), 2 car bombs exploded in Mumbai, India, "within minutes of each other" at the lunch hour. Among the targets was a top tourist attraction. The incident, for which no one claimed 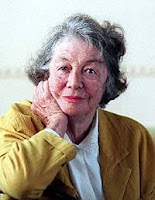 responsibility, killed 52 people and injuring 150.
... 1925, Thea Astley (right) was born in Brisbana, Australia. A schoolteacher, she published her 1st novel, Girl with a Monkey, in 1958. Her works became renowned; indeed, at the time of her death in 2004, she'd won Australia's top literary award more than any other writer. Among her acclaimed novels was Drylands (1999). Yet it's a work about which she herself seemed ambivalent. To a producer who acquired the movie rights, she complained:

'Why are you doing that novel? That was written during my feminist phase.'