... 1962, Trinidad and Tobago gained full independence from Britain. It then joined the Commonwealth of Nations, and though independent, it "acknowledged the British monarch as the figurehead chief of state from 1962 until 1976." Since then it's been a parliamentary republic. In 1498 Christopher Columbus had landed on Trinidad, the larger of the 2 islands that comprise the Caribbean country. Today Trinidad and Tobago, which is about the size of Delaware, has a population of 1.3 million.
... 1979, Sally Rand died of congestive heart failure at a hospital in Glendora, California. She'd been born Harriet Helen Gould Beck 75 years earlier in Hickory County, Missouri; Cecil B. DeMille gave her her stage name in the 1920s. Rand gained global renown in 1933 and 1934 at 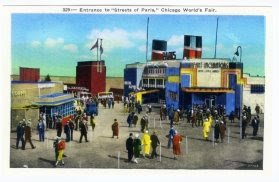 the "Streets of Paris" concession (right) at Chicago's Century of Progress World's Fair. (photo credit) There throngs watched her dance to classical music, waving giant ostrich-befeathered fans that appeared the only cover of her seemingly nude (but actually bodysuited) self. Her famous fan dance is captured in the video below. Rand's political side extended to more than sexual politics, according to her New York Times obituary:

During the 1930's, when her notoriety was at its height, she made repeated appearances before small-town civic groups and spoke out in favor of the republican forces in the Spanish Civil War.