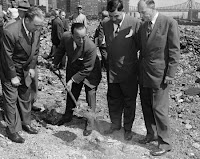 On this day in ...
... 1948 (60 years ago today) , in New York City, ground was broken for the United Nations headquarters. The brainchild of an international team of architects that included Le Corbusier, the building opened on Janury 10, 1951, having been built at a cost of $65 million. (credit for photo of Acting U.N. Secretary-General Benjamin V. Cohen, surrounded by New York officials, "remov[ing] the first symbolic scoop of earth")
... 1960, the 1st conference of the Organization of Petroleum Exporting Countries concluded in Baghdad, Iraq. The 5 founding member states of the intergovernmental organization were Iran, Iraq, Kuwait, Saudi Arabia. Since that time, 9 other states have joined: Qatar, Indonesia, Libya, United Arab Emirates,

Algeria, Nigeria, Ecuador, Angola, and Gabon. OPEC's been headquartered in Vienna, Austria, since 1965.
by Diane Marie Amann at 6:01 AM