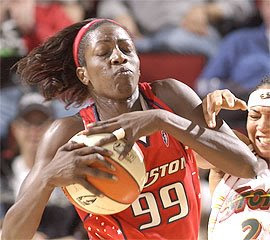 To Jaya's excellent post yesterday on "Olympian Courage," I'd like to add a bit more recognition for women's plays during this Summer Games season.
Here's to:
► Hamchétou Maïga-Ba (left) and all the women hoopsters who represented Mali. These 2008 Beijing Games marked the 1st time a women's basketball team was sent by the country, which the New York Times described as "a predominantly Muslim country where women are subject to traditional subservience, genital mutilation, inequitable access to education and household violence." But the simple feat of fielding a team may have begun to change things. Maïga-Ba, who plays forward for the Women's National Basketball Association's Houston Comets, said of the land of her birth:

'Everybody is proud of us, even the guys.'

► Mona Eltahawy (right), an Egypt-born, New York-based commentator. She published in the Washington Post a stinging op-ed, which criticized Saudi Arabia for not including any women on its Olympic team. The Post then published its own editorial echoing Eltahawy's complaint.
Caveat:
No country deserves to claim too-high ground on the matter of women in the Olympics. The Times article reminds:

Women were not allowed to participate at the 1896 Summer Games in Athens, the first Olympics of the

modern era.
They were expected to contribute applause, not athletic skill. Not until 1984 were women permitted to run the Olympic marathon, in reefer-madness fear that they might grow old too soon with such exertion; or worse, they might grow a mustache.
Or their uterus would fall out, as if it were a transmission.

Nineteen women competed in the 1900 Paris Olympics. The art student who took 1st place in the 9-hole golf tournament (above), Margaret Abbott, "is now recognized as the first female American Olympian winner."
Even today, when many women from many countries compete in many events, there's much room for improvement. More than 1 commentator's wondered if women's beach volleyball would get as much air time if its bikini-clad competitors covered up. (To which should be added this question: Would an activity so singly centered in 1 nation even be included in inter-national competition absent the costumes?) 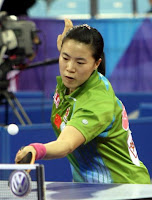 Then comes news, from Nayeli Rodriguez at Slate's XX Factor blog, on "the International Table Tennis Federation’s latest strategy for reversing low attendance to its matches": "draw attention to the sexier side of table tennis" by "urging lady players to adjust their competition outfits to flaunt more 'curves.'" (credit for 2007 photo at right of Chinese champion Wang Nan)
Here's hoping one day for an Olympics where attention's focused on how well women played, and not on how well they looked while playing.
by Diane Marie Amann at 6:02 AM

Hi Girrls, to your two excellent posts on women and Olympics, I would like to add a note for those women who unfortunatelly are not playing at all.
One example may well be Ana Guevara, Mexican 400m track and field who in addition of golds in World (2003) and Panamerican championships (2007, 2003, 1999), was a silver medal in Athens.
Despite her impressive record and good chances for Beijing Ana Gabriel Guevara refused to participate in the Olympic team and was forced to retire after denouncing the corruption of the athletics managers in Mexican sport institutions.
Ana's stance of course highly political, will hopefully contribute to bring attention to the real factors of failure in sports in Mexico.
While the Mexican public often blame cultural determinacy and lack of a "winner" attitude for poor sport (and even economic) performance, Ana's denouncing may well motivate citizens to force change on what can be changed, namely lack of transparent private investment, i.e. through education institutions, and mismanagement and corruption in the usage of public funds for, inter alia, sports development.
Ana Guevara has recently been appointed Director of the Sports Institute in Mexico City in charge of overseeing plans to improve access of the capital´s population to sport facilities. Hopefully her experience facing corruption, and the support she enjoys for as a rare national olympic star, will help the government develop policies that will yield future golds from athletes, pink and blue.

Many thanks for this! Guevara joins other athletes who've combined politics -- including the politics of sports -- with athletics.
In addition to Team Darfur, about which we posted at http://intlawgrrls.blogspot.com/search/label/Lopez%20Lomong, there're the athletes who raised their fists at the 1968 Mexico City Olympics (excellent commentary on same in yesterday's New York Times, at http://www.nytimes.com/2008/08/23/opinion/23barra.html?_r=1&scp=3&sq=carlos&st=cse&oref=slogin). There're the athletes who sued the U.S. government when it announced its boycott of the 1980 Moscow Olympics, too (see http://assets.espn.go.com/oly/summer00/s/boycott/defrantz.html).