Women's words at the DNC 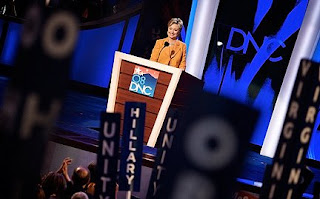 Some of the most moving words heard this week at the Democratic National Convention were uttered by women. Here's a sampling (videos available here):
From Sen. Hillary Clinton (left), the 1st woman to compete in every presidential primary, whose name was put in nomination, and for whom votes were cast before she herself moved that Sen. Barack Obama be nominated for President by acclamation:

In high school, I won the Rocky Mountain Empire Award for reciting, in alphabetical order, the 51 members of the United Nations. Back then, the task was not so hard, but the world now is more fragmented, with more countries, multiple centers of power and many sources of danger.

[T]orture is not only morally repugnant, it’s militarily ineffective. It doesn’t work. It puts our troops at risk. It endangers our national security.

Above all, she was a storyteller. She told us tales from history about heroism in the face of injustice, about beauty breaking through darkness. These stories suggested that our deepest humanity and happiness would be found by reaching out to, empathizing with and working to serve others. In these interconnected times, we need such stories.

(Full text here.)
And finally, from the superb speech by Michelle Obama (below left) on which IntLawGrrls posted a few days ago, a story about her husband that embodies -- to use Soetoro-Ng's words -- "our deepest humanity and happiness":

He’s the same man who drove me and our new baby daughter home from the hospital 10 years ago this summer, inching along at a snail’s pace, peering anxiously at us in the rearview mirror, feeling the whole weight of her future in his hands, determined to give her everything he’d struggled so hard for himself, determined to give her what he never had: the affirming embrace of a father’s love.