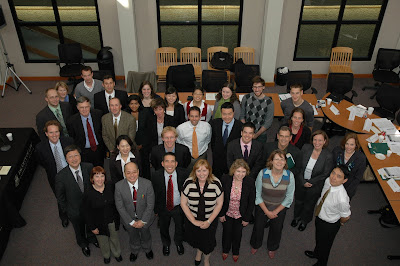 Is there a future for the International Law Commission?

A future, yes, he answered. But not necessarily the future foreseen when the ILC was established in 1947.
McRae began by listing some of the topics on the ILC's agenda:
► New draft articles on transboundary aquifers, about which IntLawGrrls just posted;
► A long-running study of treaty reservations;
► A study of how armed conflict affects treaties;
► Examination of whether the duty aut dedere aut judicare -- to prosecute or extradite -- derives solely from treaties or has become a norm of customary international law;
► A project on the responsibility of international organizations;
► Analysis of the law respecting the expulsion of aliens across state borders;
► Consideration of the immunity of state officials in the wake of cases like Pinochet and Democratic Republic v. Congo; and
► Examination of the extent to which law protects persons caught up in natural disasters like typhoons and earthquakes; that is, whether other states may intervene when the territorial state refuses to assist its own suffering nationals, as occurred earlier this year in Burma/Myanmar.
For most of its existence the Commission approached such problems always with an eye to codification -- to the drafting of treaties that would establish international rules as hard law. That goal seems more elusive, McRae said. Positing that the world is going through an "anti-treaty phase," during which "governments don't want to commit themselves to making things legally binding," McRae suggested that the ILC may find itself more and more in the business of creating soft law. He noted that draft articles articulating principles of law that states may choose to follow, like those on state responsibility and transboundary aquifers, are likely to have more global influence than a treaty that never enters into force.
McRae pointed to 2 other areas ripe for adaptation:
► Methodology. The Commission's work could be improved, he said, by greater consultation with experts outside the law. In this regard he lauded the outreach that Commissioner Chusei Yamada of Japan made to scientists in the course of developing the aquifer articles. 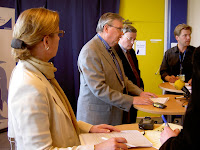 ► Diversity. Anyone familiar with the pathbreaking work of Hilary Charlesworth, Christine Chinkin, and Shelley Wright will recall that in Feminist Approaches to International Law, 85 American Journal of International Law 613, 623 (1991), they underscored that no

woman ever had sat on the 34-member Commission. That has changed a wee bit. Today there are 3 women Commissioners, Paula Escarameia of Portugal (above, middle), Marie G.

Jacobsson of Sweden (above, left), and Hanqin Xue of China (right)-- a fact that prompted McRae's allowance that criticism of the ILC as lacking diversity "has a great deal of credibility in terms of gender."
Indeed.
by Diane Marie Amann at 6:03 AM