For every important development, however, there have been numerous missed opportunities. For example, at one point, more than half of the ICTR indictments included charges of rape and 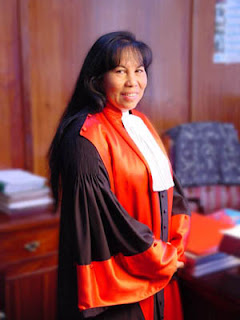 other sexual violence. The majority of cases, however, have ended in acquittal on the rape and sexual violence counts, because prosecutors failed to meet their burden of proof. Reasons cited are that witnesses declined to testify or their testimony was deemed to be controverted or not credible. In other cases, prosecutors withdrew sexual violence counts, failed to appeal acquittals, or missed deadlines for doing so. In Prosecutor v. Kajelijeli, for example, the defendant was acquitted of rape (charged as a crime against humanity), because two of the judges found the key witness lacked credibility due to inconsistencies in her testimony at trial and statements to investigators. In a strong dissent, Judge Arlette Ramaroson (Madagascar) (right) argued that the inconsistencies were not due to a lack of credibility but to an incompetent prosecutorial investigation. Later, the Prosecution missed a deadline to appeal the acquittal, and was chastised for prosecutorial negligence by the judges.

A recent chapter in this story took place before the ICTY (below right). In July 2008, the ICTY refused to allow the prosecution to amend the indictment

the Lukić case. The Lukić cousins, Milan and Sredoje (left), stand accused of war crimes and crimes against humanity in the region of Višegrad in connection with their membership in the “White Eagles” paramilitary group. The cousins were initially indicted for a number of crimes, but no crimes

of gender violence. Under the leadership of Swiss jurist Carla Del Ponte, the prosecutor’s office had indicated an interest in amending the indictment and was given until November 2007 to do so. No amendment was forthcoming, ostensibly because Del Ponte felt that to lengthen the prosecutor’s case would be contrary to the U.N. Security Council-mandated Completion Strategy.

After Del Ponte (right) stepped down in January 2008, her replacement—Belgian jurist Serge

Brammertz (left)—attempted to amend the indictment in June 2008, well after the deadline for doing 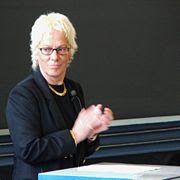 so. In addition to clarifying the charged forms of responsibility, Brammertz sought to add new counts concerning the crimes of rape, torture and enslavement arising out of the defendants’ alleged establishment of a rape camp. Many of the victims and witnesses to these crimes had already been disclosed to the defendants. Indeed, apparently 18 of the 26 female witnesses on the prosecutor’s witness list had testimony about the defendants’ involvement in sexual violence. In support of his untimely motion, Brammertz argued that the crimes should be charged

In a July 8, 2008 ruling, the ICTY denied the motion to amend the indictment on the ground that allowing the amendment after the Prosecutor’s unnecessary delay would unduly prejudice the accused. The cousins’ trial is ongoing and can be viewed here.

How to explain this mixed record of gender justice before the tribunals? Most critics of this apparent trend against gender justice take aim at the ICTR prosecution office, and in particular when it was under the leadership of Del Ponte. Advocates of gender justice have accused Del Ponte and the prosecutors in Kigali of neglecting the prosecution of crimes of sexual violence committed in Rwanda. Several policies and practices of the office of the prosecutor have been specifically singled out for criticism. The failure of early investigations to surface allegations about sexual violence is blamed on the fact that the majority of investigators were men, having been drawn from national police forces, with little experience or training in taking rape testimony from women victims and making it trial ready. Critics also point to

► the original lack of expertise in gender justice in the Office of the Prosecutor;
► the 2000 decision to disband the sexual assault investigative team formed in 1997 (it was later re-established);
► the lack of coordination between the office of the prosecutor and the Victims and Witnesses Unit (housed in the Registry);
► the failure to add sexual violence counts to new indictments despite available evidence;
► the pursuit of sexual violence claims with inadequate evidence; and
► the failure to fully and consistently incorporate investigations about sexual violence into the investigative or prosecutorial strategy.

After repeated frustrating experiences with the Tribunal,

several victims’ groups in Rwanda eventually cut off all cooperation with the Tribunal. These criticisms are compiled in an excellent report by Binaifer Nowrojee (left), now director of the Open Society Initiative for East Africa, entitled "Your Justice Is Too Slow": Will the ICTR Fail Rwanda's Rape Victims?, 1 (United Nations Research Institute for Social Development Occasional Paper 10, Nov. 15, 2005).
Overall, it appears that the Office of the Prosecution under Del Ponte proceeded without a coherent strategy for investigating sexual violence generally or a theory of how sexual violence fit into the way in which genocide was committed in Rwanda in particular. Where rape allegations are not central to a prosecutorial strategy, they become dispensable.

The current indictments against Karadžić and Mladić before the ICTY plead sexual violence as a predicate act of genocide. See, e.g., Prosecutor v. Karadžić, Case No. IT-95-5/18, Amended Indictment, at para. 17 (Apr. 28, 2000). Now that Karadžić is in custody, the new prosecutor has a chance to make sexual violence central to his prosecution of this longtime fugitive from justice. Women all over the world deserve nothing less.
by Beth Van Schaack at 6:02 AM

Firstly, I have to express my delight for finding your blog. I have read your work and am also in the process of writing a Master's degree thesis on sexual violence as crimes against humanity and genocide.

This is an interesting question you raise. However, apart from evidential and procedural set backs in charging and amending the indictments to include sexual violence, I sometimes wonder about the definitions of genocide and crimes against humanity.

Could the fact that the difficulty in proving genocide, nevermind sexual violence as genocide, not be a reason for the prosecution not putting such charges in the first place in the indictment? Even though the difference between genocide and crimes against humanity is quite extensive, isn't it also quite similar at the same time (as far as charging sexual violence is concerned?)

Thanks for the update on what's happening at the international tribunals! :D

Hey lorenzowakefield! Keep it up dude, you post some of the best comments. San Diego criminal defense attorney