(Occasional sobering thoughts.) Where to start in reviewing war news since our last post on August 21? As we await a planned 1st Presidential debate this evening -- the focus of which is supposed to be foreign policy/national security -- a review of events seems very much in order.

Pakistan
Begin, perhaps, with what appears to be the uncovering of a 3d front for armed conflict involving the United States. It's in Pakistan, where, as IntLawGrrl Naomi Norberg posted on Sunday, a terrorist bomb so devastated part of downtown Islamabad that media there were calling it the country's 9/11. (Excellent posts on same may be found at Steve Coll's blog at The New Yorker website, which I've just discovered. Coll, as IntLawGrrls posted a while back, is the Pulitzer Prizewinning author of a masterful book on U.S.-Pakistan operations pre-9/11.). Today's news from that troubled part of the world, courtesy of the Los Angeles Times: "U.S., Pakistan troops exchange fire on Afghanistan border. The Pentagon calls it a misunderstanding and denies that U.S. helicopters crossed the border into Pakistan's tribal regions." One fears the need soon for a website chronicling casualties there.
(Must say, too, that the man who replaced Pervez Musharraf does not instill confidence that things in Pakistan will improve. This week's flirting by President Asif Ali Zardari -- widower of the assassinated Benazir Bhutto -- with GOP VP candidate Sarah Palin was beyond creepy. (photo credit)) 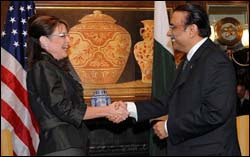 Afghanistan
Move, then, to Afghanistan. A core concern of this recurring feature, civilian casualties, continue to mount:

This year is on pace to be the deadliest for civilians since the Taliban were toppled by the American-led invasion in 2001. More than 1,445 civilians have been killed so far in 2008, and slightly more than half of those deaths, tallied by the United Nations, are attributed to insurgent forces.

This month Robert Gates, U.S. Secretary of Defense, "express[ed] his 'sincere condolences'" to the Afghan people "and promis[ed] speedier compensation and investigation after such casualties." The apology came not long after Afghan leaders demanded a SOFA, or status of forces agreement, spelling out troops' responsibilities. They called for an end to aerial attacks as well. As for average Afghans, it's reported that "As Crime Increases in Kabul, So Does Nostalgia for Taliban." And in Washington, a U.S. National Intelligence Estimate in the works is said to be so "grim" on prospects in Afghanistan that the government plans to keep it secret till after the November 4 election.
Iraq
Shift to Iraq. Violence is by no means over, yet remains less than before. In the United States mainstream media attribute this to "the surge" of added U.S. troops. We've posted in the past that events before the surge might be the major cause. A newly released UCLA study supports that view, "suggesting that ethnic cleansing by rival Shiites may have been largely responsible for the decrease in violence for which the U.S. military has claimed credit." At the negotiating table, meanwhile, it seemed that the United States had reached an agreement that would allow its troops to remain with the Iraqis' OK -- on the condition that plans for eventual withdrawal be included in the agreement. That's stalled, however. Yesterday U.S. officials blamed Iran for the impasse in its talks with Iraq.
The Count
With this news in mind, we move, finally, to the casualty count. According to Iraq Body Count, between 87,643 and 95,664 Iraqi women, children, and men have died in the conflict in Iraq since the U.S.-led invasion in March 2003. That's an increase of between 982 and 1,107 deaths in the last 4 weeks. According to the U.S. Defense Department, 4,172 American servicemembers have been killed in Iraq. Total coalition fatalities: 4,486 persons. That's 27 servicemember deaths in the last 4 weeks, all but 1 of them Americans. On the other

established front, military casualties in Afghanistan stand at 605 Americans and 376 other coalition servicemembers. That's an increase of 27 and 16, respectively, in the last 3 weeks, and a total servicemember casualty count just shy of 1,000.
by Diane Marie Amann at 6:04 AM