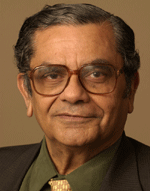 These days, it is difficult to find an unadulterated defense of globalization. Given the state of our credit markets, it is perhaps not surprising. When you realize the current global economic crisis can be traced directly back to the greed of a few U.S.-based mortgage-backed lending institutions, it is difficult to mount a wholehearted defense of the all-for-one-and-one-for-all mentality of globalization. But the maverick Jagdish Bhagwati (right), famed economist and professor at Columbia University, does exactly that. In a recent interview entitled "Why the Critics of Globalization are Wrong", Bhagwati had this to say to protesters and naysayers:

Mistaken? Strong words in the face of this current economic crisis. But Bhagwati is adament that on balance, trade has been good not only for the rich but also for the poor. He argues that the global movement for gender parity, for example, owes much to the fact that "industries competing in the world economy face fierce competition and cannot afford to indulge their prejudice against women." As companies compete for labor in order to meet export demand, they are forced to offer women the same (or similar) wages and benefits to attract strong talent. Thus, the economic impact of globalization filters into a nation's social consciousness.
Bhagwati could not resist taking a jab at his equally famous colleague, the Nobel Prize-winning economist Joseph Stiglitz, whom Diane metioned in a post yesterday. Stiglitiz has claimed free trade provides little benefit to developing countries, an assertion Bhagwati dismisses as "nonsense."
Strong words for tough times.