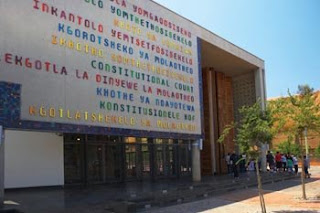 Spurred by the attacks on references to foreign law in some recent United States Supreme Court opinions, particularly in the area of the death penalty that is my main scholarly interest, I decided to focus my next project on this topic. Having spent a sabbatical in South Africa in 1992, I had followed with admiration the creation and operation of that country’s new constitutional court, and I knew that the new Constitution of South Africa specifically authorized the court to look to foreign law. I was curious:
► How was the court using this provision?
► Did engagement with foreign law present the kinds of problems that critics here identified about the practice?
I was fortunate to have made connections over the years with several former and current justices of the Constitutional Court of South Africa (photo credit), who responded positively to my requests to discuss this topic. My article summarizes the face-to-face, audiotaped interviews I conducted with eight justices. In those interviews they discussed both the value gained from the practice of looking to foreign law and their ways of addressing the concerns expressed by American critics. In addition, the article provides detailed analysis of several cases containing significant references to foreign law, along with commentary from the justices on how particular opinions were enriched by examination of other courts’ treatment of the same issues.
Whether identifying universal norms, engaging in a dialogue to help clarify an issue, or gaining insight into comparable constitutional provisions, these justices see clear benefits from exploring the opinions of constitutional courts in other parts of the world. Yet they approach such outside sources with great care, fully aware of the potential hazards of transplanting foreign legal concepts and conscientiously avoiding selective citation only to favorable outside authorities. These findings bear on the current debate and, in a world where America’s stature as a leader in protecting human rights has been compromised by Abu Ghraib and

Guantánamo, and where many other high courts engage in constitutional comparativism, suggest that the United States Supreme Court would do well by more active participation in the conversation.
by Ursula Bentele at 12:54 AM