... taketh France away as well?
Better late than never comes news that this summer France now fully accepts the jurisdiction of the International Criminal Court, even as to allegations that war crimes were committed by its nationals or on its territory. It joined the ICC in 2000 during the Presidency of Jacques Chirac (below, at far left). At that time France -- alone among all states parties so far -- invoked Article 124 of the Rome Statute of the ICC in order to put a 7-year hold on war crimes jurisdiction. The switch of positions is largely cosmetic given that France's "hold-on-a-minute" declaration would have expired on its own in mid-2009. (Other "interpretive declarations" by France, detailed here, apparently remain intact.) Still, withdrawal of the declaration operates as an endorsement of the ICC, and that has to be a good thing.
Less clear: whether France's behavior in the interim several months will prove an equally good thing.
In mid-September IntLawGrrls posted on machinations at the U.N. 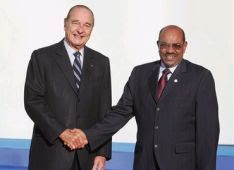 Security Council in reaction to the request for a head-of-state warrant in connection with the war his government is waging in the western Sudan region of Darfur. Debate concerns whether to defer the case for a year by invocation of Article 16 (inapt, at least 1 Rome Statute negotiator argues). Though there's been much focus on resistance by 1 member of the Council's Permanent Five -- China -- others in the P-5 also may favor deferral.
A trial balloon floated into public view on September 19, when Agence France-Presse reported the indication by an unnamed aide to France's current President, Nicolas Sarkozy, that

France is not hostile to a suspension of the ICC proceedings targeting Sudanese President Omar al-Bashir, accused by the prosecutor of genocide in Darfur, on the condition that Khartoum make a 'gesture.'

Asked what "gesture" might suffice, the aide demurred, noting only that the ICC prosecutor

already had targeted 2 other Sudanese -- neither of whom Khartoum has turned over to The Hague. (credit for above AP photo of Bashir with Chirac, at 2007 summit in Cannes)
Last week reports surfaced that Sarkozy himself confirmed the position while in New York for the opening of the U.N. General Assembly. According to Reuters,

Sarkozy announced that if Sudan changes its behavior and actively supports growing international calls for peace in Darfur, Paris would back suspending any indictments the International Criminal Court (ICC) issues against Sudanese President Omar Hassan al-Bashir.
Sarkozy made clear there would be strings attached. In a speech to the U.N. General Assembly, the French leader said Sudan would have to 'radically' alter its policy towards Darfur, where international experts say at least 200,000 people have died since 2003. It would have to remove a cabinet minister indicted for war crimes in Darfur from the Khartoum government and stop delaying the deployment of international peacekeepers.

Curiously, the official French government account of the speech says only that Sarkozy mentioned Darfur only once -- that he opened his U.N. address by declaring:

'We cannot wait to make peace and put an end to tragedy in Darfur.'

But other accounts (here and here) affirm that Sarkozy called for "radically" changing Sudanese policies at a press conference during the same GA session; indeed, with these words he made such change a Sudanese sine qua non:

'Things must be clear, there will be no recourse to Article 16 unless there is radical and immediate change in Sudan’s policies.'

Perhaps in keeping with that claim, France last

week helped broker a 6-month extension of the mandate of the U.N. Human Rights Council's Special Rapporteur on Sudan -- an extension secured notwithstanding that Sudan's diplomat "violently attacked" the "extremely critical" report delivered by that rapporteur, Sima Samar (right), who's served in Cabinet posts in Afghanistan and heads the Afghanistan Independent Human Rights Commission.
Now we must wait, to see how France and others in the P-5 next move through the Sudan/Darfur/ICC mess.
by Diane Marie Amann at 6:02 AM

I have been reading a lot lately about the consequences that awaits the Darfur region should al-Bashir be prosecuted. Many African [and other] prominent leaders have advised against prosecuting al-Bashir, citing the peace process as a reason. This seems to be a substantial reason, but is it substantial enough not to prosecute al-Bashir?

There is a clear distinction between the mandate of the ICC and the UN. The ICC is there to see that those who committed war crimes, crimes against humanity, genocide and crimes of aggression are tried in the court and receive a fair trial at that [among other]. The UN, on the other hand, has the mandate, inter alia, to enforce international peace and security. With regards to Sudan, this can be done in conjunction with the AU.

In order for the ICC to restore its reputation as a competent institution, its independence should not be interfered with. It is not under its mandate to ensure peace and security in Darfur. The UNSC passed a resolution giving the Prosecutor's office a mandate to investigate the atrocities in Darfur and it has done that. Now, the UN, together with the AU and the government of Sudan should implement the peace keeping force agreement it concluded a long while ago by deploying a joint AU and UN peacekeeping force to Darfur.

If the ICC found that there is a prima facie case against al-Bashir then the Prosecution should apply that the court issue a warrant of arrest against him. I do not think that the ICC should be swayed by reasons such as those advocated by many leaders. They were asked to see whether al-Bashir committed genocide, crimes against humanity and grave violations of international humanitarian law. They should base their decision on the facts of the case.