We've posted in the past on issues related to water -- its scarcity, the inescapable need for it, claims of right to it, and increasing attention to same. Well worth noting, then, is the initiative featured in a new ASIL Insight by Kerstin Mechlem (left), Lecturer at the Transitional Justice Institute, University of Ulster, in Northern Ireland.
Mechlem underscores the adoption last month by the United Nations' 60-year-old legal research arm, the International Law Commission, of draft articles for an international framework convention on transboundary aquifers; that is, on groundwater sources that cross national frontiers. (The draft articles are expected soon to be available here.)
After outlining the scope of the problem and events leading to adoption, Mechlem points to key aspects of the draft articles:
► the principle of equitable and reasonable utilization of water resources;
► the imposition of an obligation not to cause significant harm; and
► the imposition of an obligation to cooperate, by sharing information about water and entering agreements to protect water resources.
One novelty in the draft articles is the recognition of "the need to protect aquifers against harm, resulting, for example, from fertilizers or pesticide use or industry discharge," she writes.
The articles stop short of embracing the precautionary principle. The Rio Declaration on Environment and Development stated:

Principle 15
In order to protect the environment, the precautionary approach shall be widely applied by States according to their capabilities. Where there are threats of serious or irreversible damage, lack of full scientific certainty shall not be used as a reason for postponing cost-effective measures to prevent environmental degradation.

The Rio Declaration was proclaimed in 1992, and Principle 15 has gained currency since then. Nonetheless, in the view of the ILC, precaution has not yet become a principle of customary international law. Mechlem writes: "Thus, the draft articles refer in Article 12 to a 'precautionary approach' rather than to the 'precautionary principle.' 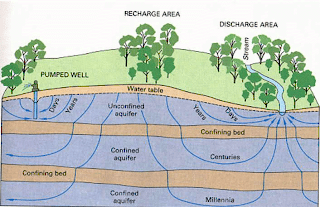 "
Mechlem, who served from 2002 to 2006 as a Legal Officer for the U.N. Food and Agriculture Organization, concludes her ASIL Insight by stating:
"Despite their shortcomings the draft articles are a significant step in the protection of transboundary aquifers." She looks forward one day to entry in force of "binding framework convention." (groundwater image credit)
by Diane Marie Amann at 6:02 AM