The ever-provocative New York Times columnist Thomas L. Friedman has just published his latest book: Hot, Flat, and Crowded: Why We Need a Green Revolution--and How It Can Renew America, which explores how the twin flames of climate change and our insatiable thirst for energy impact our world.
In short, Friedman sees a problem. And not just a small problem, but one that threatens to end the world as we know it. It may seem melodramatic, but Friedman is not an author to shy from melodrama and "catchy" over-exaggeration (his claim that no two countries that both have a McDonald's have ever fought a war against each other has since proved false).
In fairness, this particular problem is so dramatic it is not susceptible to hyperbole 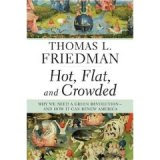 : If we cannot manage to curb our insatiable lust for energy, we risk no less than a major environmental catastrophe. Global warming promises to create a world that is hot, flat, and crowded . . . perhaps even uninhabitable. Friedman presents evidence that is both compelling and indisputable that we are rapidly heading towards the point-of-no-return. The tipping point is the doubling of CO2 emission into the atmosphere. If we go past this magic number, "all the climate monsters will come out the door."
But hope is not lost. Friedman puts his faith in transformational technological breakthroughs and American leadership. He calls for the adoption of a national strategy of "Geo-Greenism," which will not only combat climate change but will “reknit America at home, reconnect America abroad, retool America for the new century, and restore America to its natural place in the global order.
This (figurative!) call to arms is an important message that sometimes gets lost in its patriotic wrapping. Climate change is not an American problem but an international one of epic proportion. Indeed, America is unlikely to be the Biggest Loser in the climate change game--just consider what will likely happen to vulnerable and poor Pacific-island nations. Moreover, in a post-September 11 world where America has shamelessly squandered its good name, does the world even see us as having the moral authority to lead?

As the "God of Globalization," Friedman understands only too well how interconnected we have become: Pollution in India's Ganges River has a direct impact on the quality of life in New York. Each coal-gobbling factory China erects competes for resources with an Indonesian child. And every time a woman in Southern California cranks up her air conditioner, the ripple effect travels on wings of butterflies to the Brazilian favelas.
Green is not "the new red, white, and blue." Green is universal.
We need a strategy that allows all the worlds people to take ownership of the problem so that together we can construct a solution. Friedman's call for American leadership sounds in the idealistic 1960s when America was poised to solve the world's problems. But in the 21st Century, WikiPedia's model is perhaps the better approach.
by Marjorie Florestal at 7:30 AM