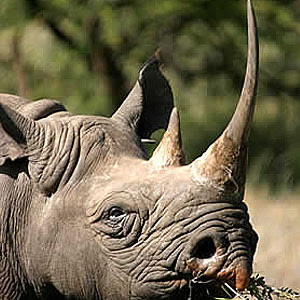 The 1st lesson of Journalism 101, on news judgment, goes something like this: "'Dog bites man' is not news. 'Man bites dog,' now that's news!"
The headline above is in much the same vein.
Popular culture paints the image of the madbull rhino charging hapless humans. But these days the real threat operates in reverse.
In Zimbabwe, poaching of the rhino, an endangered species, has spiked. There've been 70 rhino-poaching deaths in Zimbabwe since 2000, compared with zero the prior 7 years. Not surprisingly, the spike's paralleled a "breakdown" in enforcement of laws forbidding poaching, a lucrative practice on account of the profit possible in illegal smuggling of the ivory of rhino tusks. Exemplifying this breakdown:

the recent release of a gang of four Zimbabwean rhino poachers who admitted to killing 18 rhinos in five different areas of central Zimbabwe, including a semi-tame group of black rhinos slaughtered in their pens at Imire Safari Ranch.

One of several NGOs at work on this issue is the World Wildlife Federation-International. In the words of Dr. Susan Lieberman (below), Director of WWF's Species Programme:

to reverse the excellent trends in rhino populations of recent years. WWF calls on the authorities in Zimbabwe to take much stronger action against the internal poaching networks or the recent progress made in rhino conservation in Zimbabwe will be lost.

Full story here.
by Diane Marie Amann at 6:02 AM

For a counterpoint -- an upbeat story on rare animal conservation -- see "It Takes Juste One Village to Save a Species," published in the Sept. 22 edition of The New York Times and available at http://www.nytimes.com/2008/09/23/science/23monk.html?scp=1&sq=langur&st=cse.