(Illegal) US operations in Pakistan

On Thursday (September 11th), 7 years after the Bush administration launched an unsuccessful "war" against terrorism, I read Karima Bennoune's excellent post on countering terrorism by enforcing human rights, then went on to read in the Herald Tribune that

President George W. Bush secretly approved orders in July that for the first time allow American Special Operations forces to carry out ground assaults inside Pakistan without the prior approval of the Pakistani government ....

Just as I asked myself, "isn't that illegal?" I saw that "[i]t was unclear precisely what legal authorities the United States has invoked to conduct even limited ground raids in a friendly country." Indeed. Colombia's cross-border military attack on FARC rebels in Ecuador in March was considered by the Organization of American States (OAS) to be a violation of principles of international law, as well as of Ecuador's sovereignty and territorial integrity.
But more than illegality, at a time when the world is remembering and honoring the victims of the 9/11 attacks and the soldiers from numerous nations fighting and dying in Afghanistan 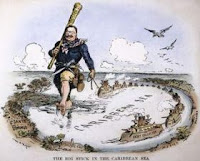 because of those attacks, it seems to me the important issue is that "last week's raid achieved little except killing civilians and stoking anti-Americanism in the tribal areas." As Husain Haqqani, Pakistan's ambassador to the US so succintly put it: "Unilateral action by the American forces does not help the war against terror because it only enrages public opinion." So as we voters go to the polls in November, please let us heed Karima's words and vote in favor of secularism and women's rights rather than militarism as a

way to counter terrorism. As our favorite French newpaper, Le Canard Enchaîné (which does not publish a full electronic version) reminds us with respect to candidate McCain's appreciation of Teddy Roosevelt's famous "big stick," (image of Thomas Nast's 1904 cartoon recreating an episode in Gulliver's Travels) it can hit hard--like a boomerang (image credit)!