The International Criminal Court is currently accepting nominations for judges. The nomination period opened July 21 and will remain open until October 13; elections will be held at UN Headquarters in , January 19-23, 2009. If you know of any individuals from ICC state party countries who would be good candidates, particularly women, please encourage them to get involved (typically by having their government nominate them). The nomination period closes in less than a month! 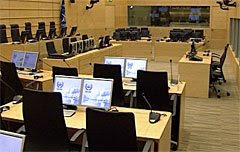 In the past, vetting the nominees and supporting the best candidates through letters and events profoundly impacted the quality and the sex of the judges nominated and elected. It is particularly critical to collect information on the current nominees and, if the pool is inadequate, to ensure additional qualified candidates are promptly put forward. (credit for photo of ICC courtroom)
A few numbers to consider:
► So far, 10 persons have been nominated to fill 6 judge slots. Click here to see the names of the candidates and basic information about them.
► Of the 6 judges leaving the court due to expirations of their term (including Judge Navi Pillay, who was recently appointed the new UN High Commissioner for Human Rights), only 1 judge, Fumiko Saiga from Japan, is eligible for re-election.
► Of the 12 judges remaining on the court before elections, 6 are male and 6 are female.
► Of the 10 nominees to the ICC, 6 are female.
Women’s and human rights organizations, scholars, and individuals have been hugely instrumental in the past in ensuring that there is greater gender parity on the Court and that good, qualified women are nominated. Having high quality women on the Court, including those with expertise in gender violence, has significantly and dramatically impacted the gender jurisprudence emerging from each of the war crimes tribunals – female judges have sat on the groundbreaking cases recognizing rape as an instrument of genocide, a crime against humanity, a crime of war, a means and form of torture, persecution, and enslavement, among many other advances.
The ICC Statute is historic in including rape, sexual slavery, enforced prostitution, forced pregnancy, enforced sterilization, gender-based persecution, and trafficking (particularly of women and children) as war crimes and crimes against humanity. The Court is mandated to investigate and prosecute gender crimes and to have fair representation of men and women as judges, and within its staff.
In each of the current situations before the ICC – the Democratic Republic of Congo, , Darfur, and the – sexual violence has been part and parcel of the crimes committed in those conflicts, even though all of the charges have not necessarily reflected this fact in some of the DRC cases.
Help ensure that the pool of qualified candidates for the ICC, including stellar female candidates, is increased and that the best judges are elected in January. Feel free to contact me directly at KAskin@JusticeInitiative.Org if you want more information. Get involved!
by Kelly Askin at 12:40 AM