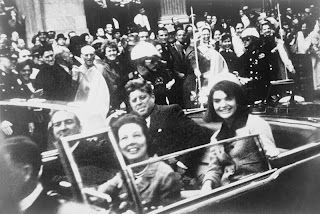 This year marks the 45th anniversary of JFK's assassination in Dallas, Texas. To commemorate the occasion, and to celebrate the President's historic visit to the University of North Dakota shortly before his death, UND held an exciting interdisciplinary conference entitled "John F. Kennedy: History, Memory, Legacy."

Attendees included such luminaries as Ted Sorenson, the President's speechwriter, and Richard Reeves, the noted former New York Times columnist. Also in attendance was my colleague Brian Landsberg who began working at the Justice Department's Civil Rights division in 1964. Over his 30 year tenure at Justice, Brian litigated many of the landmark civil rights cases of the last century--including cases on school desegregation and voting rights. I was privileged to have also been invited to the conference to discuss Kennedy's trade legacy.

Although few outside of trade circles recognize it, Kennedy has had a powerful influence on the modern trading system. He managed to get Congress to pass the Trade Expansion Act of 1962 at a difficult time both domestically and internationally. On the domestic front, a powerful oil lobby oppossed trade liberalization, the U.S. economy was in a recession, American workers feared the impact of a trade deal on their jobs, and a fairly isolationist general public was suspicious and resistant to a new trade deal. Internationally, JFK had to confront a newly-expanding European Community, the struggle for the hearts and minds of developing countries, and of course The Cold War. Despite these many competing interests, Kennedy recognized the needs of the United States was best served by a trade deal that provided greater economic opportunity for all. He masterfully worked with competing constituencies to ensure passage of the Act.

As a result of his efforts, the Kennedy Round of international trade negotiations was launched at the GATT (the precursor to the WTO). Although he would not live to see the launch of the Round, Kennedy's legacy was historic. When concluded, the Kennedy Round changed the face of international trade, shifting from a primary focus on tariff reductions to the important work of providing a legal structure for trade.

Kennedy was neither a fierce supporter or opponent of free trade. Rather, he recognized that, properly managed, free trade provided more benefits than detriments. He was ultimately a pragmatist, and both the country and the world was better of for it. I hope the next president studies and emulates Kennedy's successful trade policies.
by Marjorie Florestal at 7:57 AM