On seeking shelter from the ICC

The fact established in Monday's post -- "'unsignature' affords Bashir no refuge" from prosecution by the International Criminal Court -- provokes an obvious question:
Where else might Sudan's President sing "Gimme Shelter"?
The answer, of course, is the Security Council of the United Nations. Set up 6 decades ago to promote states' collective advancement of international peace and security, often as not the Council has been immobilized by states' 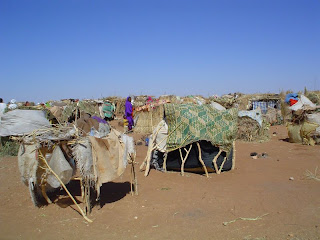 disagreement, thus permitting conflict and insecurity to continue.
For years Darfur (left) has proved an issue rife with disagreement. And as our colleague, Northwestern University Law Professor David Scheffer, notes in his recent Jurist op-ed, the request of ICC Prosecutor Luis Moreno-Ocampo for an arrest warrant against President Omar al-Bashir has by no means abated disagreement. The Security Council has divided into 2 camps, Scheffer writes:
► 1st, "those members willing to permit justice to run its course against President Bashir," and
► 2d, "those members seeking to derail Mr. Moreno-Ocampo's move ... for the ostensible purposes of advancing peace objectives in Darfur ...."
How might the Council take the case away from the ICC judges now mulling whether to grant the warrant application?
The proffered mechanism is this provision of the Rome Statute of the ICC:

Article 16
Deferral of investigation or prosecution
No investigation or prosecution may be commenced or proceeded with under this Statute for a period of 12 months after the Security Council, in a resolution adopted under Chapter VII of the Charter of the United Nations, has requested the Court to that effect; that request may be renewed by the Council under the same conditions.

But in the view of Scheffer -- who, as U.S. Ambassador at Large for War Crimes Issues led the U.S. delegation at the 1998 treaty-drafting conference in Rome -- Article 16 can't carry the weight that opponents of the Bashir prosecution want it to bear. Tracing the negotiating history, Scheffer explains that the provision was intended solely to permit a Security Council check on "premature" referrals by nation-states or the independent prosecutor -- and not on the prior decision of the Security Council itself to refer a matter to the ICC. He adds:

It would have astonished my colleagues and me in 1997 and 1998 to be told that Article 16, which was conceived as a compromise procedure to use at the infancy of a situation before the ICC, would be applied some day to short-circuit a Security Council referral lodged more than three years ago ... If that scenario had been presented to the negotiators more than a decade ago, Article 16 never would have been approved ....

Scheffer bolsters this conclusion with policy reasons against deferring the Darfur case. (Reasons also are set forth in this Article 16 Q&A posted by Human Rights Watch.) Before so doing, however, he includes a host of questions that he says would have been debated at Rome had states believed that Article 16 might operate in this manner.
Strikes me that such questions themselves point to a structural argument against construing Article 16 to allow a Security Council short-circuit.
Security Council referral is authorized as follows:

Article 13
Exercise of jurisdiction
The Court may exercise its jurisdiction with respect to a crime referred to in article 5 in accordance with the provisions of this Statute if:
....
(b) A situation in which one or more of such crimes appears to have been committed is referred to the Prosecutor by the Security Council acting under Chapter VII of the Charter of the United Nations; ....

Nothing in the structure of the Rome Statute connects Article 13(b) to Article 16. The 2 are disjunctive, separate. In between them are Article 14 and 15, which detail conditions for the state party referral and prosecution action, respectively. The absence of any provision detailing Security Council referral indicates that Article 16 pertains only to the methods discussed in Articles 14 and 15. By this reading, the Rome Statute contains no clawback of the 3d method, Security Council referral.
Time will tell how the Council itself chooses to read the Statute.

(credit for U.S. Agency for International Development photo of transit camp near Nyala, Darfur, for persons internally displaced by the conflict in that western region of Sudan)
by Diane Marie Amann at 6:03 AM