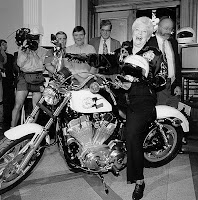 On this day in ...
... 1933 (75 years ago today), Dorothy Ann Willis was born in Lakeview, Texas. "[S]he grew up in Waco, where she made her mark early on as an outstanding student who excelled at debate and participated in Girls State," a leadership program sponsored by the American Legion Auxiliary. A teacher, she married David Richards and brought up 4 children in Austin. In her free time the woman whose married name was Ann Richards volunteered on political campaigns, among them that of Sarah Weddington, who'd argued Roe v. Wade before the U.S. Supreme Court. In 1990 Richards herself was elected Governor of Texas. The state's website says she "brought a vitality and outrageousness to the governship that had not been seen in decades," a judgment reinforced by the photo above right. Richards, whom the Washington Post obituary described as a "feminist Democrat" with a "Texas twang, halo of white hair and quick-on-the-draw quips," lost her 1994 re-election bid to George W. Bush. She died of cancer in 2006. (photo 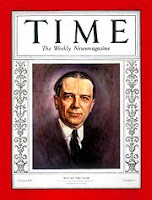 credit)
... 1929, Germany's Weimar government accepted the Young Plan, which renegotiated the harsh reparations payments that had been set forth in the post-World War I Treaty of Versailles. For his negotiation efforts the chair of the committee that forged the eponymous plan, U.S. financier Owen D. Young, would be named Time's Man of the Year (left). The Young Plan was implemented in 1930; however, payments faltered amid a global economic depression and the rise of Nazism in Germany.
by Diane Marie Amann at 12:30 AM