On this day in ...
... 2003 (5 years ago today), Swedish Foreign Minister Anna Lindh was stabbed fatally while shopping in Stockholm. She died the next day. Lindh (left), 46, an immensely popular politician, had been expected eventually to become Sweden's Prime Minister. A man was convicted of Lindh's murder; however, in 2004 his life sentence was overturned, and the assailant was committed to a mental institution. (credit for AP photo by Geert Vanden Wijngaert)
... 1971, a day after guards "forcefully suppress[ed] a scuffle" and transferred 2 prisoners to isolation cells in an overcrowded state penitentiary just south of Buffalo, New York, the riot at Attica prison (below) escalated: 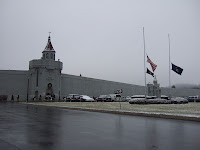 the prison’s nerve center, where they beat several guards with pieces of pipe, lengths of chain, and baseball bats, fatally injuring one of them.
More than one thousand strong, the inmates quickly took control of the prison and set fire to several of its buildings. By the time the state police was summoned and managed to recapture part of the facility that afternoon, the inmates had regrouped in one of the yards and were holding 40 hostages in a ring of wooden benches.

The uprising would end days later with more bloodshed. Nearly 3 decades later, litigation ended with a federal court approving a settlement of $8 million "to compensate more than 500 inmates and relatives for the abuse that the prisoners suffered."
by Diane Marie Amann at 6:01 AM