On this day in ...
... 1877, in Budapest, Rosika Schwimmer (left) was born. For years a leader of feminist and peace movements in Hungary and elsewhere in Europe, Schwimmer was living in London, "serving as International Press Secretary of the International Woman Suffrage Alliance and as correspondent of important European newspapers," when World War I broke out. She worked against the war with other women; among her close associates was Jane Addams. (Addams is the transnational foremother of IntLawGrrls guest Mary Ellen O'Connell, and guest Catherine Lanctot posted this past spring on antiwar efforts of other World War I women.) Schwimmer persuaded a U.S. auto magnate to charter an ocean liner and sail the eponymous Henry Ford Peace Expedition to Europe in late 1915-early 1916. She served as Minister to Switzerland -- making her Hungary's 1st woman 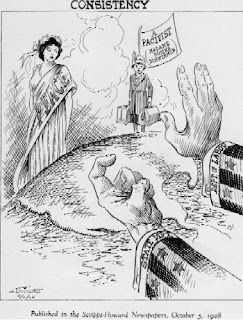 ambassador -- after the war. But political turmoil in her home country soon prompted Schwimmer to seek refuge in the United States. There she became embroiled in the legal struggle depicted in the editorial cartoon at right,which ended when the Supreme Court rejected her bid for citizenship in United States v. Schwimmer (1929), on account of her refusal to take up arms in defense of the country. Schwimmer, whom ImmigrationProf Blog recently honored as immigrant of the day, died in New York in 1948. (photo credit; 1928 cartoon credit)
... 2003 (5 years ago today), the 2000 Cartagena Protocol on Biosafety entered into force. The protocol's intended to supplement the 1992 Convention on Biological Diversity (logo below left) by "seek[ing] to protect biological diversity

from the potential risks posed by living modified organisms resulting from modern biotechnology. " The protocol has 147 states parties; the United States is not among them. Nor is it among the 191 states parties to the Convention itself.
by Diane Marie Amann at 1:15 AM