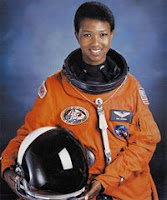 ... 1992, Dr. Mae Carol Jemison became the 1st African-American woman in outer space, as a member of a NASA mission aboard the shuttle Endeavour. Born in Alabama, raised in Chicago, and educated at Stanford and Cornell universities, Jemison (right) earned her M.D. degree in 1981. She practiced medicine in Los Angeles and worked for the Peace Corps in Africa before beginning to train as an astronaut in 1987. Jemison left NASA a year after her shuttle mission, started a consulting group, and wrote a young readers' book, Find Where the Wind Goes: Moments from My Life (2001).

... 1974, a military junta led by Lt. Col. Mengistu Haile Mariam and known as the Derg, or Committee, seized control of Ethiopia from 82-year-old Emperor Haile Selassie I. Scores of political opponents were killed in the aftermath; the former emperor himself was strangled 11 months after the coup. The 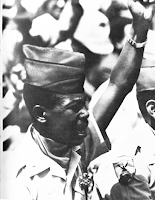 authoritarian regime lasted until May 1991, when Mengistu (left) "fled the country for asylum in Zimbabwe." Similar to the domestic judgment levied last month against Chad's former dictator (IntLawGrrls' post here), this past May a court in Ethiopia convicted Mengistu in absentia of genocide and sentenced him to death. It's a judgment that Mengistu might one day have to face, should the current crisis in his country of asylum, Zimbabwe, end with the departure of its longtime leader, Robert Mugabe.
by Diane Marie Amann at 6:00 AM