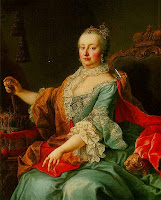 On this day in ...
... 1743 (265 years ago today), in the southwest Germany city after which it was named, the Treaty of Worms was signed by Austria, Britain, and Sardinia. Maria Theresa (right), Archduchess of Austria and "the only woman ruler in the 650[-year] history of the Habsburg dynasty," ceded lands in exchange for payment by Britain of an annual subsidy.
... 1968 (40 years ago today), Albania withdrew from the Warsaw Pact, an alliance 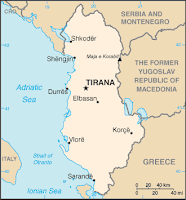 of countries within the Soviet orbit. The immediate cause of the withdrawal was Moscow's August invasion of Czechoslovakia; however, Albania (map at left) had been drifting further away from the Soviet Union, and closer to Communist China, for years. Contemporary contrast: this past April, Albania "was invited to start accession talks" with NATO.
by Diane Marie Amann at 6:01 AM