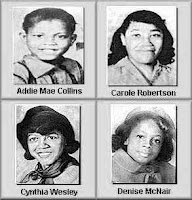 On this day in ...
... 1963 (45 years ago today), in Birmingham, Alabama, bomb exploded in an African-American church, killing Sunday School students Denise McNair, Addie Mae Collins, Carole Robertson, and Cynthia Wesley, all aged between 11 and 14. Twenty-three others were wounded, and 2 boys were shot to death in the rioting that followed.
... 1874, in Bern, Switzerland, representatives from 22 countries convened an International Postal Conference; it led to adoption on October 9 of the Treaty of Bern, by which countries established "a single postal territory for the reciprocal exchange of

correspondence between their post-offices," in place of the system of bilateral agreements that previously had governed. Monitoring the treaty is the body now known since 1878 as the Universal Postal Union (emblem at left).
by Diane Marie Amann at 1:58 AM