... 1963 (45 years ago today), in Kuala Lumpur, The New York Times reported, "The country of Malaysia came into being this morning with the raising of her new flag and the release of 101 white pigeons." The country was formed by a federation of Malaya, Singapore, Sarawak, and Sabah. Unrest ensued, and Singapore withdrew 2 years later.

... 1974, U.S. President Gerald Ford announced that men who'd evaded the draft or deserted from the armed forces during the Vietnam War could get amnesty by completion of 2 years' public service. Cases of men already punished would be reviewed by a clemency board. It was estimated that nearly 13,000 evaders and deserters were fugitives, and that 4,500 of them had found refuge in Canada. (Today it's reported that the number who fled north was much larger -- depending on the source, 3 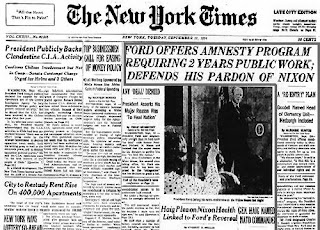