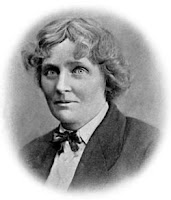 On this day in ...
... 1936, Ettie Annie Rout (right) died of "a 'self-administered' quinine overdose" in Cook Islands, 59 years after she'd been born in Tasmania. Rout grew up in Wellington, New Zealand, where her work as a typist for courts and commissions of inquiry "gave her a wide range of experiences on social issues." Later she worked as a writer and in business, but became best known as a health activist, concerned about the spread sexually transmitted diseases. Her emphasis on the problem, while she was a volunteer nurse during World War I, drew praise in France criticism in New Zealand. New Zealand also banned her Safe Marriage: A Return to Sanity (1922), "a contraceptive and prophylactic manual for women." Britain published it -- prompting a bishop to proclaim her

the most wicked woman in Britain.

... 1374, by means of the Pact of Koszyce, named after the city whose coat of arms is at left, Ludwik the Great, King of Poland and Hungary, granted certain privileges to the Polish nobles in exchange for their promise that he could "occupy the Polish throne should one of his daughters have no male heirs."
by Diane Marie Amann at 6:01 AM