On this day in ...
... 1988 (20 years ago today), about 6 weeks after hundreds of thousands had demonstrated in cities across the country, and just over 3 weeks after then-43-year-old Aung San Suu Kyi, "daughter of Burma's independence leader stood outside Shwedagon Pagoda" (left) in Rangoon, "and addressed a huge crowd on the need for democracy," military leaders crushed the Burmese democracy movement. Troops fired into crowds, killing many and arresting others. To this day, "[t]he military remains firmly in control" in the country it calls Myanmar.
... 1961, the bodies of 12 persons were found in the wreckage of a plane outside Ndola, a town in Northern Rhodesia (today, Zambia). Among those killed in the crash was U.N. Secretary General Dag Hammarskjöld, who'd been on his way to take part in "peace talks following clashes between 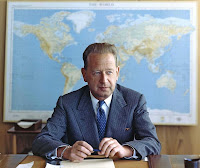 United Nations peacekeeping troops and forces striving for independence in the breakaway Congolese province of Katanga." The 1961 Nobel Peace Prize was awarded posthumously to Hammarskjöld (right), born 56 years earlier in Sweden; in the words of the BBC, "he did much to raise the profile of the UN and the post of secretary general."
by Diane Marie Amann at 6:01 AM