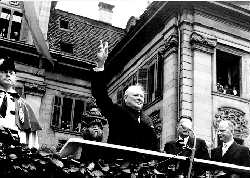 ... 1946, in a speech at the University of Zürich in Switzerland (left), on the subject of European integration, Winston Churchill, the once and future British Prime Minister, proposed to avoid European wars like those of the 1st half of the 20th century by means of what he called a "sovereign remedy":

[T]o recreate the European fabric, or as much of it as we can, and to provide it with a structure under which it can dwell in peace, in safety, and in freedom. We must build a kind of United States of Europe. In this way only will hundreds of millions of toilers be able to regain the simple joys and hopes which make life worth living. The process is simple. All that is needed is the resolve of hundreds of millions of men and women to do right instead of wrong and to gain as their reward blessing instead of cursing.

... 1994, U.S. troops landed in Haiti to secure the return of Jean-Bertrand Aristide, who'd been elected President in 1991 but gone into exile following a military coup. Aristide would serve till 1996 as the President of Haiti (in red on map at right), be elected again in 2000, and then, in 2004, go into exile in South Africa.
by Diane Marie Amann at 6:00 AM