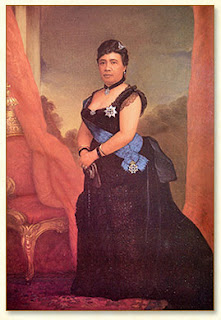 On this day in ...
... 1838 (170 years ago today), Lili‘uokalani (right) was born in Honolulu to high-ranking Hawaiian chiefs. Upon the death of her brother, King Kalākaua, in 1891, she became Queen of Hawaii. (portrait credit) Two years later she was overthrown and imprisoned, and a "provisional government" put into place. As we've posted, the deposed queen objected to the Treaty of Annexation that this new regime entered with the United States in 1897. IntLawGrrl Kathleen Doty has named Lili‘uokalani her transnational foremother.
... 1898 (110 years ago today), in the Battle of Omdurman, troops led by Britain defeated an army of Sudanese who'd ruled "a large part of Egyptian Sudan" since 1881. The defeat in the city, which lies on the western banks of the Nile opposite Khartoum, secured British dominance over Sudan.