On this day in ...
... 1946, on the Riviera, "the International Film Festival" -- France's "first important international postwar cultural event -- opened its doors at the former Casino de Cannes." What's now known as the Festival de Cannes has grown from "a film forum" at which "nearly every film screened walked off with a prize" to an annual competition covered by more than 4,000 journalists.
... 1973 (35 years ago today), as detailed in "Mrs. King Defeats Riggs, 6-4, 6-3, 6-3, Amid a Circus Atmosphere," a New York Times page 1 article, 29-year-old Billie Jean King, "a five-time Wimbledon champion and the most familiar face in the women's athletic movement," the article said, "reaffirm[ed] her status as one of 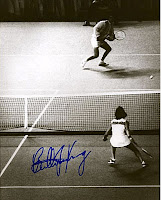 the gifted and tenacious competitors in sport, female or male," by defeating a man, "55-year-old hustler" Bobby Riggs, in a $100,000-prize tennis match in Houston, Texas (right). Three and a half decades later the account of what was seen as a victory for "women's liberation," as it then was called, strikes one as a bit bizarre:

Most important, perhaps for women everywhere, she convinced skeptics that a female athlete can survive pressure-filled situations and that men are as susceptible to nerves as women.