On this day in ...
... 1923 (85 years ago today), Dorothy Wiltse was born in Inglewood, California. Her father, a 2d baseman for a local semi-professional team, taught her to play baseball at an early age. At age 12 she led the team that won the 1936 Southern California girls softball championship, then played semi-pro ball while working at a furnace company after she graduated from high school. In 1944, Dottie Wiltse Collins (left), as she was known after marriage, began a professional career that lasted well over a decade. An "ace pitcher" for the Fort Wayne Daisies, an 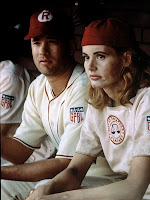 Indiana "team in the All-American Girls Professional Baseball League, established in 1943 by Chicago Cubs owner Philip K. Wrigley to keep ballparks busy while men were away at war." She was the model for the pitcher played by Geena Davis in the 1992 film A League of Their Own (right). Collins died last month in a nursing home in Fort Wayne.
... 1971, in Montreal, Canada, the Convention for the Suppression of Unlawful Acts Against the Safety of Civil Aviation was adopted.
by Diane Marie Amann at 6:01 AM

Labels: Convention for the Suppression of Unlawful Acts Against the Safety of Civil Aviation, DMA, sports, terrorism