On this day in ...
... 1946, Christine Todd Whitman (left) was born in New Jersey. She was that state's Governor from 1996 to 2001, resigning to serve 2 years as Administrator of the Environmental Protection Agency. The author of It's My Party Too (2005), Whitman now leads a consulting firm and is founding co-chair of the Republican Leadership Council, the goal of which "is to support fiscally conservative, socially tolerant candidates and 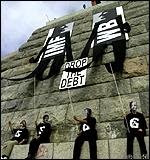 to reclaim the word Republican."
... 2000, thousands of anti-globalization protesters confronted riot police in Prague, Czech Republic, during an International Monetary Fund/World Bank summit. The international meeting would be cut short a day. (photo credit)
by Diane Marie Amann at 6:00 AM