On this day in ...
... 1998 (10 years ago today), Google was born; that is, the California-based enterprise -- the websearch engine that IntLawGrrls (among many others) cannot do without -- incorporated as a privately held corporation.
... 1993 (15 years ago today), following a bloody 11-day siege, "separatist rebels in the northwestern region of Abkhazia," Georgia, "captured the 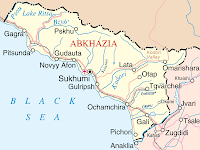 Abkhazian capital Sukhumi." An October 1993 Time article recapping events contained passages whose prescience is apparent now that violence between Russian and Georgian troops has flared not only in Abkazia, but also in another would-be breakaway region of Georgia, South Ossetia -- and now that Russia's declared its recognition of Abkhazia and South Ossetia as states:

The revolt in Abkhazia, where a small minority of ethnic separatists want an independent state, has put the fate of Georgia on the line.

Ironically, the principal architects of Georgia's predicament may be the same Russian military commanders who are supposed to be enforcing the U.N.-sanctioned cease-fire.

What is happening to Georgia today could be repeated all along the fringes of the old Soviet empire tomorrow.

Meanwhile, an article published in Thursday's LeMonde indicates that the tension caused by the Georgia-Russia standoff may be spilling over into other areas -- such as the Russian cancellation of a planned interstate meeting this week, and, "notably, the question of Iran's nuclear program?" (credit for map showing Abkhazia in yellow, the rest of Georgia in pink, and Russia in brown)