... 1958 (50 years ago today), French voters approved the Constitution of the Fifth Republic. The change occurred in the wake of May 1958 "[r]ioting in Algiers by the French population of Algeria," which had "led to the fall of the last government of the Fourth Republic." Still in effect today (albeit recently altered, as IntLawGrrl Naomi Norberg posted), the 1958 Constitution expanded the powers of the President.

... 1945, U.S. President Harry S. Truman proclaimed the "Policy of the United States With Respect to the Natural Resources of the Subsoil and Sea Bed of the Continental Shelf":

Having concern for the urgency of conserving and prudently utilizing its natural resources, the Government of the United States regards the natural resources of the subsoil and sea bed of the continental 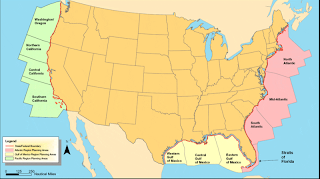 shelf beneath the high seas but contiguous to the coasts of the United States as appertaining to the United States, subject to its jurisdiction and control. In cases where the continental shelf extends to the shores of another State, or is shared with an adjacent State, the boundary shall be determined by the United States and the State concerned in accordance with equitable principles. The character as high seas of the waters above the continental shelf and the right to their free and unimpeded navigation are in no way thus affected.

Truman's proclamation, which had the effect of extending U.S. boundaries as depicted above left, "soon became the trend setter and was immediately followed by similar unilateral declarations"; these led to the formation of customary international law giving coastal States rights" that were, in turn, "universally accepted by the 1958 Geneva Convention on the Continental Shelf."