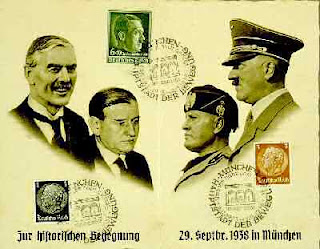 On this day in ...
... 1938 (70 years ago today), in Germany, leaders of that country as well as Britain, France, and Italy concluded the Munich Pact, which took the Sudetenland (below right, in red) from Czechoslovakia and gave it to Germany. Though applauded by some at the time, the effort to avert further German aggression failed so miserably that critics' contemporary description of the Pact -- "appeasement" -- retains pejorative power to this day. (credit for German postcard above, which depicts Pact signers, left to

right, Neville Chamberlain of Britain, Édouard Daladier of France, Benito Mussolini of Italy, and Adolf Hitler of Germany)
... 1938 (70 years ago today), the League of Nations unanimously approved a resolution on the Protection of Civilian Populations Against Bombing From the Air in Case of War, which maintained that:
► "The intentional bombing of civilian populations is illegal";
► "Objectives aimed at from the air must be legitimate military objectives and must be identifiable"; and
► "Any attack on legitimate military objectives must be carried out in such a way that civilian populations in the neighbourhood are not bombed through negligence".
As was the case with many other acts by the League, this did little to deter massive aerial bombardment of civilians, by both Allied and Axis Powers, in the World War II years that followed.
by Diane Marie Amann at 6:01 AM