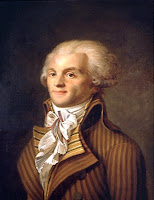 On this day in ...
... 1793 (215 years ago today), Maximilien Robespierre (right) launched the period of the French Revolution known as the Reign of Terror when he "declare[d] Terror 'the order of the day.'" The declaration touched off nearly 2 years in which political enemies -- an estimated 18,500-40,000 persons -- were killed. Robespierre himself would perish beneath the guillotine days after the end of La Terreur. (image credit)
... 1978 (30 years ago today), Egyptian President Anwar Sadat, Israeli Prime Minister Menachem Begin, and U.S. President Jimmy Carter began what would be nearly 2 weeks of negotiations on framework for Middle East peace at the U.S. President's Maryland retreat, Camp David. The Camp David Accords were released at the conclusion of the meeting, on September 17. A collection of historial 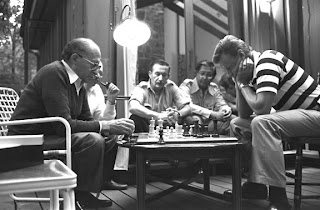 materials related to the negotiations may be found here. (credit for photo of Begin playing chess with U.S. National Security Advisor Zbigniew Brzezinski during Camp David negotiations)
by Diane Marie Amann at 5:59 AM