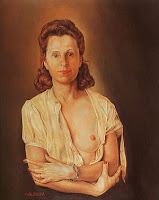 On this day in ...
... 1894, Elena Ivanovna Diakonova was born in Russia. She contracted tuberculosis as a young woman and was sent to a sanatorium, where she met, fell in love with, and married the French poet Paul Éluard. The couple became involved in the surrealist movement. She became a muse not only to Éluard but also to other writers and artists. In 1929 she launched an affair with Salvador Dalí (1904-1989); the 2 married in a civil ceremony in 1934 and in a Catholic ceremony (by special dispensation) in 1958. Gala Dalí, as she came to be known, was a muse to Salvador, painter of the 1944 portrait of her at right. (credit) He even agreed to her rules respecting the castle he bought her in Púbol, Girona, Spain:

[I]t was agreed that the painter could not go there without her prior permission in writing to do so. Between 1971 and 1980, Gala would spend periods of time at her castle, always in summer.

ala was buried at the castle after her death in 1982.
... 1813 (195 years ago today), the Post of Troy, New York, referred to the United States as "Uncle Sam," thus giving the country a nickname that endures, indeed is iconic in the guise at left, to this day. Some say the name's linked to a Troy meatpacker who supplied barrels of beef marked "U.S." to the Army -- whose soldiers began calling it "Uncle Sam's" -- during the War of 1812 that pitted the fledgling country against its erstwhile colonial power, Britain. (image credit)
by Diane Marie Amann at 6:01 AM