... 1998 (10 years ago today), in Phnom Penh, Cambodian security forces fired into crowds of protesters who'd been occupying a city park for 2 weeks; at least 1 was killed. Meanwhile, leader Hun Sen ordered his opponents arrested. Demonstrators objected to a "marred" parliamentary election in July, which handed victory to Hun Sen, who'd 1st become prime minister in the mid-1980s and who remains so today.

Let us begin by expressing our profound sorrow for what this agency has done in the past. Just like you, when we

think of these misdeeds and their tragic consequences, our hearts break and our grief is as pure and complete as yours. We desperately wish that we could change this history, but of course we cannot.
On behalf of the Bureau of Indian Affairs, I extend this formal apology to Indian people for the historical conduct of this agency. And while the BIA employees of today did not commit these wrongs, we acknowledge that the institution we serve did. We accept this inheritance, this legacy of racism and inhumanity. And by accepting this legacy, we accept also the moral responsibility of putting things right.

(Full statement here.) Gover, a member of the Pawnee Tribe of Oklahoma who's now a law professor at Arizona State University, took pains to explain he was speaking only for the Bureau of Indian Affairs, and not for the entire United States.
Just this year, 2 other countries have extended apologies to their indigenous citizens. In 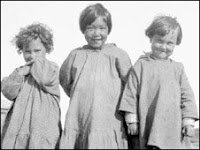 February Australia apologized to its aboriginal peoples. And as foreshadowed in our post on that event, in June Canada apologized to its First Nations for its state policy of assimilating children by sending them to boarding schools where their cultures were erased and where many suffered abuse. (credit for 1930 archival photo of 1 Inuit and 2 Métis girls, students at the All Saints residential school in Shingle Point, Yukon, Canada)