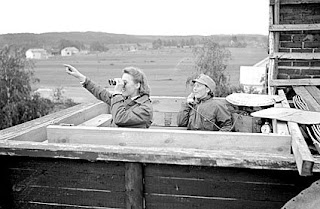 On this day in ...
... 1920, in Finland, the Lotta Svärd organization was formally established as a women's voluntary auxiliary paramilitary group. Named after the heroine of a Finnish poem, who continues to fight after her husband dies in battle, the organization continued a tradition begun during the Finnish Civil War and World War I, in which women helped in combat. In World War II the "Lottas," as they were known, helped at hospitals, at air-raid posts (as depicted at right), and elsewhere. "By 1944 it included 242 000 volunteers, the largest voluntary auxiliary organisation in the world, while the total population of Finland was less than four million." (photo credit)
... 1888 (120 years ago today), Chile annexed Easter Island, located 3,700 kilometers west of the mainland. Though several

thousand of the indigenous Rapa Nui people once had occupied the island, by then fewer than 200 remained, "since all the rest had been taken to the guano deposits in Peru." The aftermath of annexation and its effects on the remaining indigenous inhabitants, is described here. The island is renowned for giant moai statutes like that at left, today a UNESCO World Heritage site. (credit for 1916 photo)
by Diane Marie Amann at 6:00 AM