In the face of terrorism, human rights law’s requirement that states “respect and ensure” rights necessitates that states take active steps to safeguard their populations from violent attack, but in so doing do not violate rights. Security experts usually emphasize the aspect of ensuring rights while human rights advocates largely focus on respecting rights. The trick, 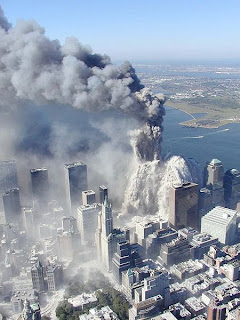 which neither side in the debate has adequately referenced, is that states have to do both at the same time. Hence, both our contemporary human rights and security discourses on terrorism need to be broadened and renewed. This renewal should be informed by the understanding that international human rights law protects the individual both from terrorism and the excesses of counterterrorism, like torture. To develop this thesis, my article Terror/Torture, 26 Berkeley Journal of International Law 1 (2008), explored the philosophical overlap between both terrorism and torture and their normative prohibitions. As I explain in this, my 1st IntLawGrrls post, the article aims to spark the development of a new human rights approach to terrorism by suggesting new discourses around the paradigm of terror/torture.
The seventh anniversary of the atrocities of September 11, 2001 (above right), is perhaps an appropriate time to stress that, in addition to continuing their work to criticize state practices in the context of the “war on terror,” international human rights lawyers need to develop an analysis of and specific response to the phenomenon of Muslim fundamentalism and affiliated transnational jihadist movements. The response to Muslim fundamentalism needs to be developed in the context of assessing other fundamentalisms – Christian, Jewish, Hindu – as well. (For an example, see the website of Women Living Under Muslim Laws/Femmes sous les lois musulmanes.)
Moreover, any such analysis and response need to be free from discrimination against Muslims – but not by pretending that the particular and grave challenge to international law from these fundamentalist and jihadist movements does not exist. Their primary victims, as the U.S. National Strategy for Combating Terrorism acknowledges, are other Muslims and people of Muslim heritage or those who live in the Muslim world. However, as that Strategy fails to acknowledge – but as Robert Dreyfuss explains in his 2005 book, Devil's Game – Western policies in th 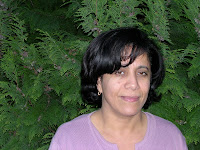 e region have historically contributed to the rise of these movements. The social project of these movements also poses a particular threat to women’s human rights, as is evident from even a cursory glance at the website entitled Secularism is a Women's Issue.
Today’s somber anniversary is a good time to remember the importance of human rights support for those in the Muslim world and Diaspora Muslim populations who have exposed and opposed Muslim fundamentalist terrorism and whose human rights have been imperiled as a result. One example is Cherifa Kheddar (above left), the president of Djazairouna, an association of Algerian victims of Islamist terrorism. Kheddar’s brother and sister were both murdered by Algeria’s fundamentalist armed groups during the terrible 1990s. Since then, she has worked tirelessly in one of the most dangerous parts of the country to support victims of terrorism – and to demand justice for them. In addition to enduring the ongoing threat posed by the resurgent terrorism of Al Qaeda in the Islamic Maghreb, which seeks to rekindle the horrors of the 1990s in Algeria, Kheddar has also been penalized by the Algerian government for her opposition to an amnesty that was given to both non-state and government perpetrators. As is detailed here and here, she was demoted in her government job, and may lose her government housing (a very difficult sanction in Algeria’s impossible housing situation).

Another imperiled and important opponent of jihadist terrorism is the Algerian journalist Mohamed Sifaoui (left), who is known for his infiltration of Al Qaeda in Europe, which produced a celebrated exposé. Sifaoui is also an outspoken advocate of women’s rights. He was reportedly attacked by two men with links to Algerian armed groups on the streets of Paris in June. A civil society campaign currently seeks to have his French police protection reinstated. (See here and here.)
The real struggle against terrorism – as opposed to the “war on terror” which has so challenged international law – is a human rights struggle carried out in part by people like these with their voices and pens and organizing efforts. The only way such efforts can succeed is with sustained and thoughtful support from human rights advocates. Counterterrorist policies that violate international law clearly undermine the endeavors of people like Sifaoui and Kheddar. But a human rights response that focuses solely on the impact of counterterrorism, and not of terrorism itself, hinders their work as well. Instead, international lawyers need to develop what Gita Sahgal has called a “human rights account” of terrorism. Perhaps that could be our best contribution to commemorating the terrible events of September 11, 2001.

Welcome, Karima, and thank you for this reminder that fundamentalist terrorism raises serious human rights issues in the societies where it is produced, so to speak, and must be countered through secularism and women's rights rather than continued military action, as the opinion piece I read in yesterday's Herald Tribune suggests.

Welcome Karima! I look forward to more of your thoughtful and provocative pieces.