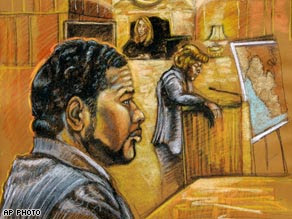 CNN has just reported the conviction of Charles "Chuckie" Taylor, Jr. for torture and conspiracy to commit torture, the first conviction ever under the U.S. statute providing for universal jurisdiction over acts of torture. (The courtroom sketch at right is from the CNN blurb). The statute in question (18 U.S.C. sec. 2340) provides:

(a) Offense.— Whoever outside the United States commits or attempts to commit
torture shall be fined under this title or imprisoned not more than 20 years, or both, and if death results to any person from conduct prohibited by this subsection, shall be punished by death or imprisoned for any term of years or for life.

(b) Jurisdiction.— There is jurisdiction over the activity prohibited in subsection (a) if—

(c) Conspiracy.— A person who conspires to commit an offense under this section shall be subject to the same penalties (other than the penalty of death) as the penalties prescribed for the offense, the commission of which was the object of the conspiracy.

We've discussed the case before here. Now we know it can be done.