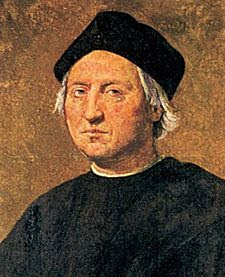 I've got Christopher Columbus on the brain. Today is officially Columbus Day in the United States, and for the first time in my adult life, I have not made a concerted effort to forget that. For the last six months, I have been immersed in all things Columbus. I am researching the life and times of this man who has had such a profound impact on my life in preparation for writing a book. It has been an emotionally-charged experience.

I remember as a kid sitting in my sixth grade social studies class listening to Mr. Branch teach us about Columbus. Here are some things I learned back then:

It turns out, Mr. Branch was wrong on all counts. But, at the time, I absorbed and regurgitated the information without a thought. In fact, Columbus was a popular figure in my elementary school. We used to sing songs about him on the playground. I'm serious! ("In fourteen-hundred-and-ninety-two, Columbus sailed the ocean blue . . .")

In my college years, Columbus suddenly shifted from a benign and heroic figure to a rapist, colonizing madman. He killed the Indians (of course, he erroneously named them "Indians"). He massacred their culture and replaced it with Spanish imperialism. He paved the way for slavery in the New World.

In the third phase of my reintroduction to Columbus, I find myself falling somewhere in between the naivetee of my childhood and the militancy of my early adult years. It turn out everything I ever learned about Columbus was only a half truth. Columbus was not a great navigator. In fact, he was wrong in his calculations most of the time. He was a visionary, but the careful, meticulous work of navigation often proved too tedious for him. Columbus certainly did not discover that the world was round. Early Greek philosophers and scientists had already theorized the world was round--and they even had the mathematical equations to prove it. By the time Columbus was traipsing through Europe in search of a benefactor for his expedition, every self-respecting, educated person knew the world was not flat. And Columbus did not discover America. Credible evidence exists to show the Vikings found and left America long before Columbus. Even more spectacular, Dr. Ivan Van Sertima made the case for a pre-Columbian African presence in America in his ground breaking work They Came Before Columbus.

But none of those facts can change the transformational nature of Columbus' voyages. He changed the course of human history in a way no one else before him had ever done. For a trade scholar like me, it is indisputable that modern trade history began with Columbus. In his search for a western route to India and China, he reconstructed the modern trading system in a way that continues to resonate to this day. It's impact can still be felt all over Europe, Africa, Asia and the Americas. As a Haitian-born "West Indian" woman, I certainly continue to feel the impact of Columbus' voyages in my own life (I have written a series of essays on the point, which can be found here.)

In the face of all that, I find it impossible to not at least acknowledge this day. Happy (?) Columbus Day.
by Marjorie Florestal at 10:32 AM

Thanks for this post. I was about to comment on the 12 of October edition of LawGrrls to complain about the lack of mentioning of this date, given that it is the 12 the official date of the arrival of Columbus, or Colón, to the American Continent.

I wanted to contribute to your post sharing a small piece of the debate that exists in Latin American countries about this date.
I am Mexican, and I was taught to celebrate 12 October, el día de la raza, The day of race...as it signifies the beginning of the colonization, which led, in Mexico, and other territories controlled by the Spanish colonizers, to the beginning of the mestizaje, the mix between Europeans and Indigenous (which included rather violent episodes of death and rape). But this is particular to Mexico where there is a dominance of the mestize class (in detriment, it is claimed, of the indigenous populations, that live marginalized from society). But this is done, in a conciliatory tone, as the celebration of the union of two worlds, that led to who we are today. This official attitude to the date is shared by Chile, for example.

Conversely, for example in Ecuador, where indigenous populations enjoy more recognition and legal protection, or in Argentina, where indigenous populations were almost swept from the map, 12 of October is officially no longer celebrated, and any festivity around this date would be considered as an act of discrimination, prohibited by the Convention Against all forms of Racial Discrimination!

Hence, 'Happy Debate on Columbus Day' may be a better closing line to choose for your post around this very important date.

Thanks for your comment. My history as a Haitian mirrors much of your own history as Mexican. While many think of Haiti only in terms of its late European colonizer--the French--much of the racial hierarchy had already been set with the Spanish. And it lives today, which always astonishes me.

On the larger point of what does it mean to "celebrate" Columbus, I am torn. To my mind, ignoring this day simply ignores reality. For those of us born in the Americas, Columbus profoundly changed our lives. There is no way around that reality. Some countries have adopted "Indigenous People's Day," which arguably shifts the focus to where it needs to be. At this point in my life and my research, I guess I'm ready to face the man and his legacy head on.

dear Marjorie, thanks for your reply. I was left thinking by your question on celebration. Well, I guess that offering a day off has a positive connotation to the date. And this is precisely what Argentina for example, contends. (we give days off when we celebrate winning a battle or a happy event....not for a defeat or death). As you said, Columbus Day defined dramatically the course of history, and it signifies many positive things, such as exploration...however it is also a date that projects that failure of humanity in this exploration, that of domination and death,a failure that has not been recognized and more importantly that continues to exist in many other regions of the world (recent past Srbenica, Rwanda? Today Darfur?). Without contesting the significance of the date, or denying the positives (us!) that yield from it, I do believe that just as any other tragic date, symbolic or not, Columbus day should be a date for reflection. In the context of Darfur, for example, it could be one of the earliest platforms of never again, no matter the sailing flag!

Thanks to both of you for this dialogue.

With nearly 1/2 of my ancestors hailing from Italy, I feel obliged to mention as well the significance of "Columbus Day" to the Italian-American community. In places like North Beach, San Francisco's Little Italy, it's a day of and for pride -- renamed Italian Heritage Day in recognition of the debate Marjorie and Deborah have discussed. (See http://www.sfcolumbusday.org/)

And see too "Map Quest," http://www.theatlantic.com/doc/200701/lester-alsace. Though written in 2007, it's posted today at Atlantic in recognition of today. The story tells of "[a] journey through Alsace-Lorraine to the town that gave America its name."

Deborah, I agree with you 100 % that we need a rallying cry of "never again!" It's one of the primary reasons I've embarked on writing this book--somehow, we always manage to forget history. Perhaps better stated, we refashion history in the image of the victor. And Diane's thoughtful response brings the issue home for me. Thanks Diane for your thoughts and for the link. I followed it, and I was struck by the way those moments of great emotional complexity Deborah and I are both grappling with are categorized exclusively as moments of triumph. The interesting question is how do we bridge the gap in understanding?/empathy?/solidarity between the two worldviews?