The good news:
Upon signature last week by President George W. Bush, the Child Soldier Accountability Act became U.S. law. This means that recruitment and use in combat of children are now criminal acts subject to prosecution in U.S. courts. Criminalized is recruitment of children "under 15." As Human Rights Watch details here, that age line comports with the 31-year-old protocols to the 59-year-old Geneva Conventions; however, it is much lower than the line of 18 drawn in many later international law instruments.
The bad news:
The age-line discrepancy is no small thing.
Notwithstanding U.S. officials' apparent recognition that children recruited to serve as soldiers are victims of crime, the United States 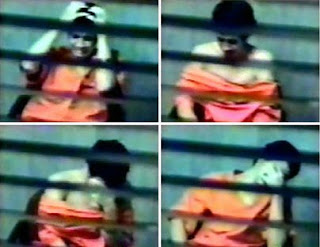 persists in its prosecution of alleged child soldiers. Among them, as we've posted, is Toronto-born Omar Khadr, was 15 years old when captured in Afghanistan. He's spent his adolescence at the U.S. military base at Guantánamo Bay, Cuba, under conditions of detention and interrogation (above; credit) that his lawyers say have harmed his mental health. The situation has been condemned by Canada's Supreme Court, and lawyers have demanded Khadr's repatriation. Although plans to start a trial by military commission yesterday have been scrapped, U.S. efforts to prosecute Khadr -- on charges of murder, attempted murder, conspiracy, material support for terrorism -- continue. In similar predicament is another detainee, Mohammed Jawad, 16 when captured; see Jamil Dakwar 's ACLU Blog post here.
Some day, perhaps, there will be a measure of accountability for the treatment of these child soldiers?

(Hat tip on news of the new U.S. law to Pamela Merchant at the Center for Justice and Accountability, a San Francisco-based NGO)